The Premier League Kicks programme is one of the Premier League’s flagship programmes. Since starting in 2006, the aim of PL Kicks has been to use the power of football to give youngsters the opportunity to engage in constructive sporting opportunities in the local communities.

Kicks now engages with over 65 professional clubs across the country, with the West Ham United Foundation delivering the programme for over ten years.

Since the West Ham United Foundation became involved, over 7,670 participants have engaged with Kicks, many of which have gone on to become involved with other Foundation programmes. There have also been coaches who started with the Kicks programme who have continued their journey to work full time with the Foundation. Throughout the week there is over 28 hours of delivery across venues in East London and Essex which are free to attend for those aged between 8 and 19.

The Kicks programme engages participants in constructive activities, which include a wide variety of sports, coaching and music activities as well as opportunities for educational and personal development. This has helped the West Ham United Foundation to respond to local need and transform the lives of those in the community.

This year the Cup's theme was ‘This is Everyone’s Game’ to promote inclusion and equality in sport. As well as the Under 16 Girls and Under 16 Mixed tournaments, there was also the chance for participants to join in with an accessible football demonstrations and activities. Some of these activities included visually impaired football, sitting volleyball and amputee football.

Ninety Premier League Kicks teams took to the field to battle it out for the chance to be crowned Kicks Cup Champions. With over 700 participants taking part, representing 65 clubs, this year’s Kicks Cup was the biggest community event ever hosted by the Premier League. The West Ham United Foundation took sixteen participants to the tournament at Warwick University in Coventry which made up a Mixed and Girls’ team, both with substitutes. 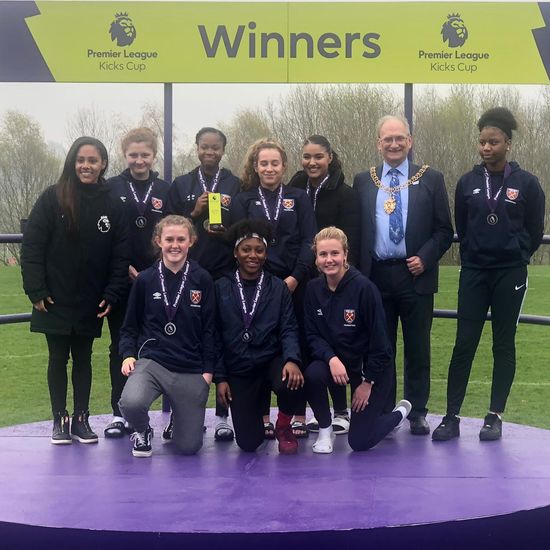 The Girls’ team won the Fair Play Award from the Premier League due to the respect they showed to the other teams and committing the least number of fouls.

Najma Shariffu, Sessional Coach, worked with the Girls’ team in the build-up to the Kicks Cup, and spoke about their performance on the day: “I am extremely proud of the enthusiasm and determination to compete in every game displayed by the girls. They are determined to develop as a group to build on this experience”

The Boys team remained unbeaten until the Quarter Finals, where they were up against the Liverpool Kicks team. After playing the full game both teams remained at deadlock in a goalless draw, where West Ham United were knocked out on penalties. The boys’ team were particularly strong on their technical ability linked with quick passing which led to some excellent goals.

George Chukwuma, Senior Community Sports Officer, attended the event and works closely with all Kicks participants. George praised the professionalism of both teams, as well as their dedication to the game.

“Both teams were very professional, before their fixture the teams respected their opponents and shook hands after each game. Winning the Fair Play award was a real highlight as it shows that we help develop players both on and off the pitch.

“The boys played really well during the group stage and scored some fantastic team goals. We were all disappointed that we couldn’t retain our title, but we would like to congratulate Watford Mixed and Swansea Girls for being crowned champions.”

Each week the West Ham United Foundation runs 24 sessions across Newham, Tower Hamlets, Havering & Barking & Dagenham. These sessions are free to attend and open to anyone aged between 8 and 19. If you would like to get involved in these sessions email [email protected] for more information.