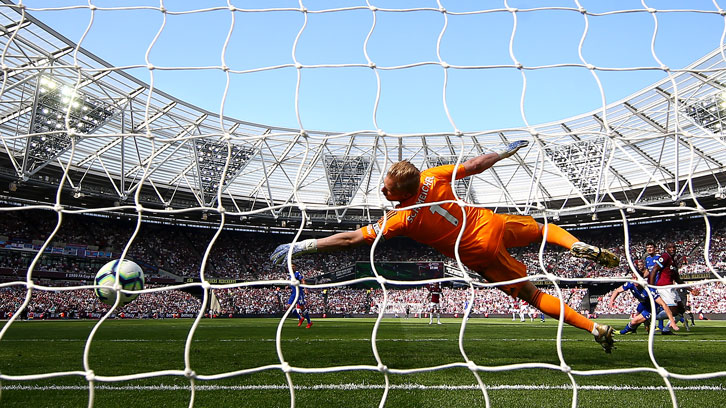 Michail Antonio said any pleasure he took from scoring in Saturday’s 2-2 Premier League draw with Leicester City was negated by the Foxes’ late equaliser.

That allowed Leicester, who had earlier equalised through Jamie Vardy, to snatch a point for the second time this season when Harvey Barnes scored in the second minute of added time.

It could have been like last week when we had quite a few opportunities and still lost the game, so we’ve got to take the positives and take the point

“All we can do is just got to take the positives from the game because we did play well and dominate the game. We scored goals and we had the fight and the grit this week, but we just didn’t manage to get the three points that we need. Next week, hopefully we can.”

Antonio’s sixth goal of the season came in familiar fashion, as a fine build-up down the left flank culminated in Mark Noble crossing and Antonio rising above Ben Chilwell to plant a powerful header past Kasper Schmeichel.

“I’m very pleased, as I am every time I score a goal, but it’s just disappointing that the goal didn’t come along with the three points,” the No30 continued. “Nobes put a great ball in and I made a great run and it just ends up on my head, like I’ve got a magnet on there!

“We dominated the first half and we tried to come out in the second half and do the same thing again, but they came out and showed why they’re in the Premier League as well and managed to get two opportunities and two goals of their own.”

However, Antonio is not giving up on that target while it is still mathematically possible.

“As a professional footballer, you can’t take your eye off it, but all you can do is go out there and give your best to try and get three points from every game, then we’ll see where we finish,” said the winger. “We have got to keep going, keep pushing and try to give something to the fans until the end of the season.

“It could have been like last week when we had quite a few opportunities and still lost the game, so we’ve got to take the positives and take the point.”

One positive was the return of Jack Wilshere from an ankle injury, four months after his last Premier League appearance at Newcastle United in December – a sight welcomed by the goalscorer.

“I’m very pleased for him,” the 29-year-old confirmed. “He’s a quality player and a great player to have in the squad, so it’s good to have him back and hopefully we can keep him there.”