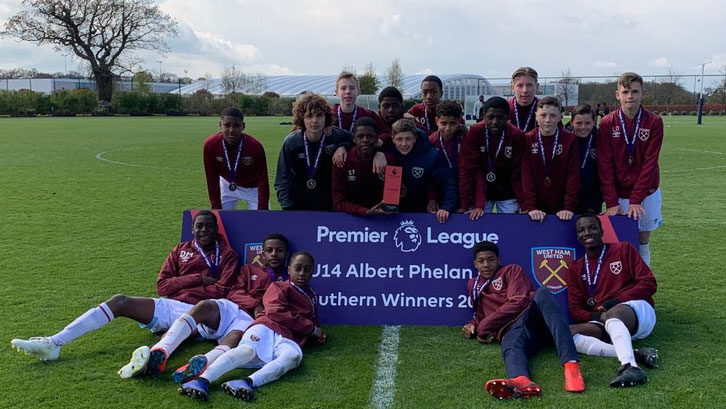 West Ham United’s schoolboys and first-year scholars enjoyed a successful weekend on both sides of the Atlantic Ocean.

The final of the tournament, which is named in honour of long-serving Premier League games programme event consultant Albert Phelan, was hosted at Tottenham Hotspur’s Academy in Chigwell.

A fortnight ago, the young Hammers had also overcome Crystal Palace in dramatic style in the semi-finals, scoring a late equaliser to draw 2-2 before triumphing in a penalty shootout. Prior to that, the Irons had beaten West Bromwich Albion in the quarter-finals.

On the other side of the Atlantic, the U17s made a perfect start at the 2019 Generation adidas Cup in the United States.
Kai Corbett was the hero, scoring the winning goals in 1-0 Group A wins over Club America of Mexico and MLS side NY Red Bulls.

The Hammers will face host club FC Dallas, who have also won both matches without conceding a goal, with the winners topping the group. Both teams are already through to the quarter-finals.

You can watch live coverage of the game at 7.45pm on Monday evening UK time here via the MLS website.

The knockout stages will then begin on Tuesday, followed by the semi-finals on Thursday and the final on Saturday 20 April, which will be played at the 20,500-capacity Toyota Stadium.