Alese: We need another big performance at Derby 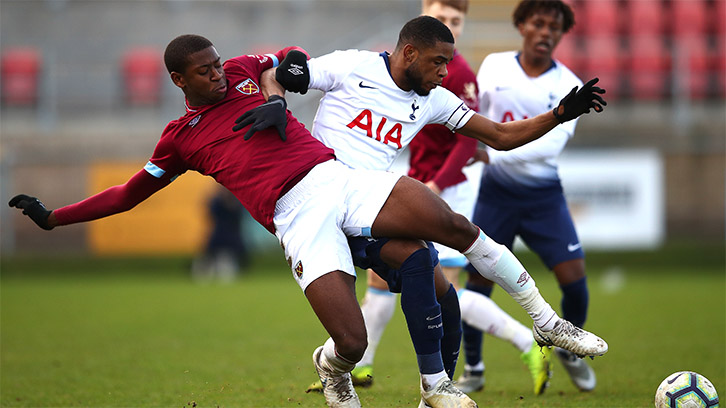 West Ham United defender Ajibola Alese feels Monday’s Premier League 2 match against Derby County will be a challenging test as the Hammers look to improve their chances of survival.

Last week’s 1-0 win over Leicester at London Stadium moved the Irons out of the PL2 Division 1 relegation places on goal difference.

Dan Kemp’s spot-kick was all that separated the sides as the Irons sit above bottom clubs Tottenham and Swansea with two games remaining.

It’s been a tough season for Liam Manning’s side but Alese, who has impressed at centre-back, making eleven appearances so far for the side this campaign, believes playing for the U23s has undoubtedly helped his progression after signing his first professional contract with the club last summer.

“I think the transition from 18s to 23s was fairly smooth, partly because I was around the squad as a first-year scholar but also because of the other players in the group,” he said. “Their quality makes it easier to integrate into the group.

“The injuries to Tunji [Akinola] and Josh [Pask] have meant that I’ve played a more prominent role this season but I also believe that my performances earlier in the season for the 18s warranted an opportunity to step up.” 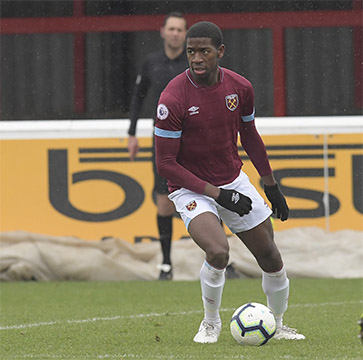 At just 18, Alese has impressed since making the step-up to the squad last season. The youngster broke on to the U23 scene shortly after signing terms as a first year scholar in 2017 following a number of assured displays.

On the international stage, the centre-back received numerous plaudits after helping England to reach the semi-finals of the 2018 UEFA European U17 Championship finals.

With Manuel Pellegrini keen to blood through youngsters, there remains hope for Alese to make a first team start sometime in the future having already trained with the senior squad on a few occasions.

For the time being, though, the defender is fully focused on helping the Hammers secure their league status with the Irons set to play Everton at London Stadium in the last game of the season.

“The win against Leicester was massive for us,” he told whufc.com. “We knew that we needed to win in order to give us the best chance of staying up so it was a great feeling to get the win.

“In recent weeks there’s been a good feel around the team and the win topped that off. We need another big performance on Monday.

“We expect a very tough game against Derby. I don’t think there’s any game we can go into expecting it to be easy and they have some very good players so it should be an interesting and challenging game.”

Monday’s crucial match at Pride Park kicks off at 7pm.