Masuaku: If we play exactly the same way next week, we will win the game 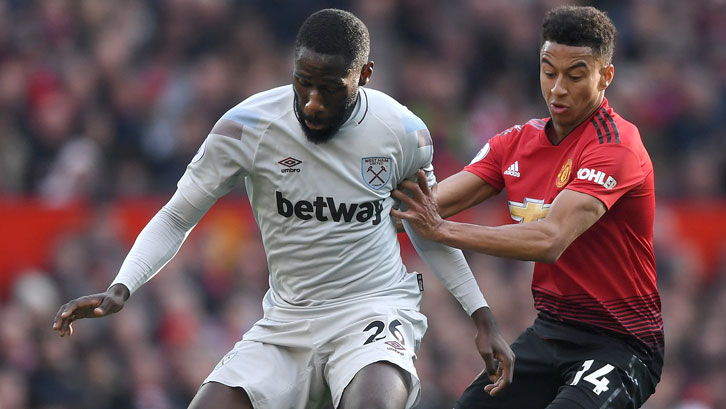 Arthur Masuaku could hold his head high after producing one of a number of fine West Ham United performances in Saturday’s 2-1 Premier League defeat at Manchester United.

The DR Congo international returned to the starting eleven for the first time since 29 January and showed no signs of rust in an impressive and, at times, scintillating display.

However, the outstanding showings put in by Masuaku and his fellow Hammers counted for nothing as circumstances conspired against them at Old Trafford and ultimately left them with nothing.

We dominated long parts of the game, we played some really good football and had the possession, we had some good chances and we need to just keep going like this

“We played really well, everyone is frustrated about this game and I don’t even know how we lost this game,” he lamented. “We should have won.

“I think everyone is happy about the performance and we need to take the positives and move onto the next one.

“Everyone is at it. In the last games I don’t think we played as we wanted as a team and today, from the first minute, we showed a great team spirit, played great football and if we want to finish the season well, we need to keep playing like this.

“We dominated long parts of the game, we played some really good football and had the possession, we had some good chances and we need to just keep going like this.

“If we play exactly the same way next week, we will win the game.”

Masuaku himself is hoping to keep his place for the home game with Leicester City next Saturday, with Aaron Cresswell struggling with a knee injury, and his performance at Old Trafford will undoubtedly help his cause to start at London Stadium.

“The last few weeks I didn’t play as I wanted but this is football,” he observed. “I just need to try to keep going, to train good and show the manager I am able to play.

“It’s like this sometimes, football. Today, I played and I am happy about my performance. I played good and I just need to keep going, that’s it.”

While they were denied by the crossbar and Manchester United goalkeeper David de Gea, West Ham’s sense of injustice stemmed from a series of officiating decisions that saw Felipe Anderson have a ‘goal’ disallowed and the hosts awarded two debatable penalties, both of which were converted by Paul Pogba.

“It’s really hard to take,” Masuaku admitted. “It’s the referee’s decision and sometimes you need a bit of luck to win this game. They are a big team but I think we deserved more.

“I think the VAR is going to help the referee in his decisions. Today, for example, I don’t know what to say, I’m frustrated.”

While there was frustration, there was also pride in the standard of West Ham’s performance, which was without doubt one of the best they have produced at Old Trafford in recent seasons.

Masuaku says the Hammers need to maintain that level over their final five Premier League fixtures in the hope they can still overhaul the four teams immediately above them and snatch seventh place.

“Seventh position is not impossible. If we win the next game, we have a good chance to go to the seventh position and this is our target for the end of the season.”