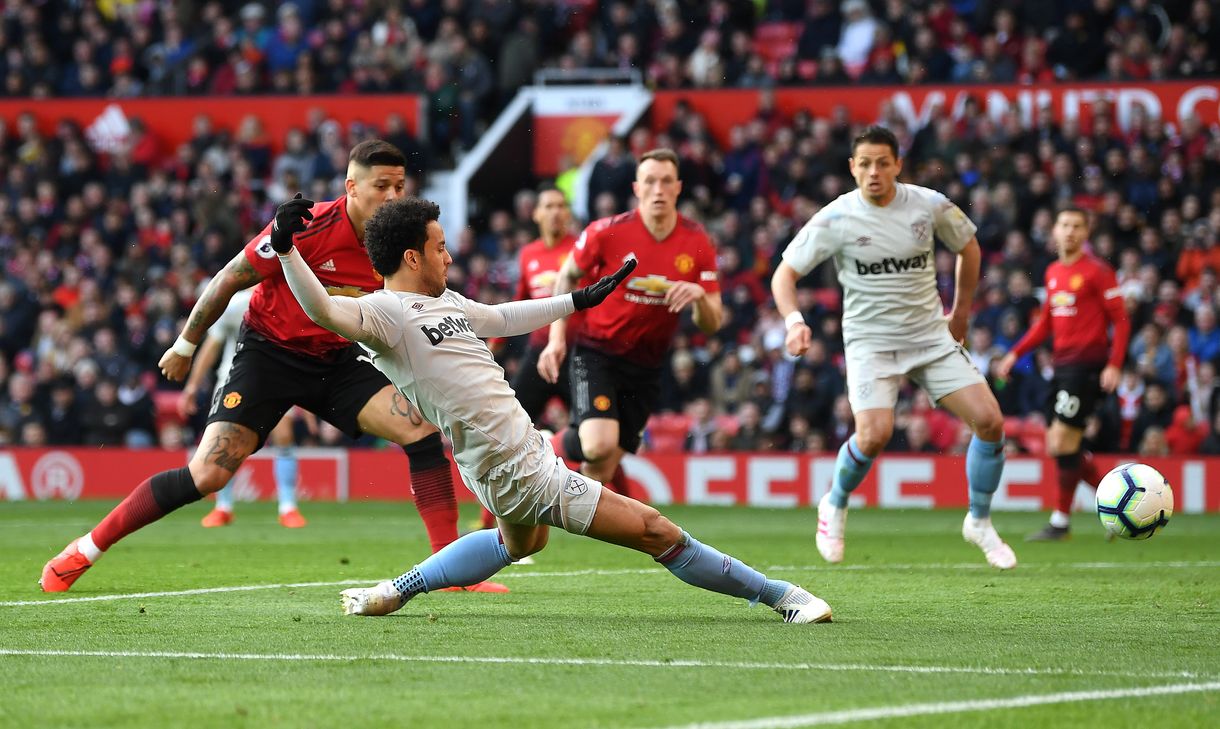 A pair of Paul Pogba penalties sent West Ham United to a harsh 2-1 defeat at Manchester United on Saturday evening.

The Hammers were positive and inventive throughout and looked likely to go onto a positive result when Felipe Anderson notched his first goal of the year to cancel out Pogba’s first spot-kick early in the second period.

Michail Antonio hit the crossbar and drew an outstanding fingertip save from David de Gea as the visitors pressed, but Pogba was handed his second chance from 12 yards ten minutes from the end, and the Frenchman made no mistake once more to seal the points.

West Ham started brightly and had their fans out of their seats just ten minutes in when Felipe Anderson acrobatically finished from Chicharito’s knockdown, only for the linesman’s flag to cut short their celebrations.

There was further frustration to follow nine minutes later when Robert Snodgrass went to ground to challenge Juan Mata in the box, and referee Graham Scott pointed to the spot. Pogba stepped up and drilled his penalty down the middle as Lukasz Fabianski dived to the right.

West Ham were close to landing a swift reply, as Felipe Anderson got to Snodgrass’ corner first at the near post, but couldn’t get quite enough on his header and it flashed across goal.

At the other end Angelo Ogbonna made good blocks to deny Jesse Lingard and Romelu Lukaku, but West Ham were giving as good as they got and were unfortunate to trail at the interval.

Manuel Pellegrini’s men continued undeterred after the interval, and only needed four minutes of the second period to level the game.

Felipe Anderson was the man on target, stealing into space at the far post and sliding home after Manuel Lanzini exchanged passes with Snodgrass to work space for a cross from the left flank.

Ole Gunnar Solskjaer responded by introducing Marcus Rashford from the bench and he almost had an immediate impact, forcing a good save from Fabianski with a low right-footed across that was destined for the bottom corner.

Rashford headed over from a good position after Phil Jones nodded across goal on 63 minutes, but the Hammers came again and a substitute of their own, Antonio went desperately close twice in the space of two minutes late on.

First, he cut inside onto his left foot inside the box and rattled the crossbar with a thunderbolt of a shot, then de Gea produced an unbelievable save to prevent his downward header from a Grady Diangana cross from finding the net.

The hosts made the most of their good fortune by moving down the other end of the pitch and winning an 80th minute penalty. Anthony Martial streaked clear on goal and the referee had no option but to award the spot kick as Ryan Fredericks slid in from behind to stop him.

Pogba stepped up for the second time of the evening and placed the spot-kick perfectly into the bottom left corner.

It was rough on the Hammers, who deserved more from their brightest away display since the turn of the year.