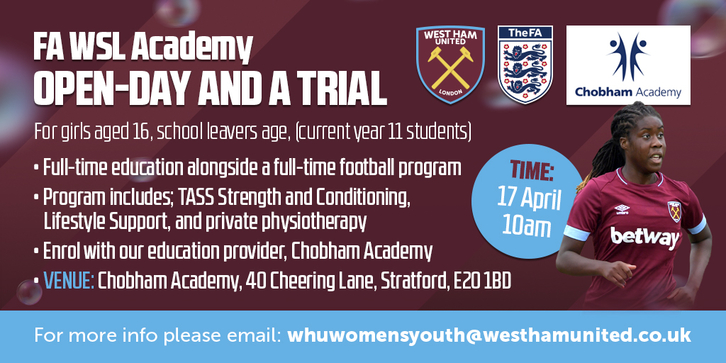 West Ham United Women’s Academy will be hosting the second round of their open trials on Wednesday 17 April at Chobham Academy.

In September 2018, the FA introduced a brand new 16-20 WSL Academy compromising of a full-time football programme, national fixtures against other WSL teams, weekly strength and conditioning, lifestyle and physiotherapy provision, as well as still balancing their education.

West Ham United women's team have partnered up with their brand new education provider, Chobham Academy, who have been reported by Ofsted as a school that is ‘outstanding in all areas’.

We now invite you to come and join us for your academics, whilst playing football for West Ham Academy!

The West Ham United FA WSL Academy trials are set for Wednesday 17 April 2019, and if you’re a young woman aged 16 - school leavers age - you can be there. The trials will include a tour of Chobham Academy, followed by a trial on the main pitch.

Contact our Head of Women’s Academy, Myles Smith, to book your slot or find out more information: whuwomensyouth@westhamunited.co.uk