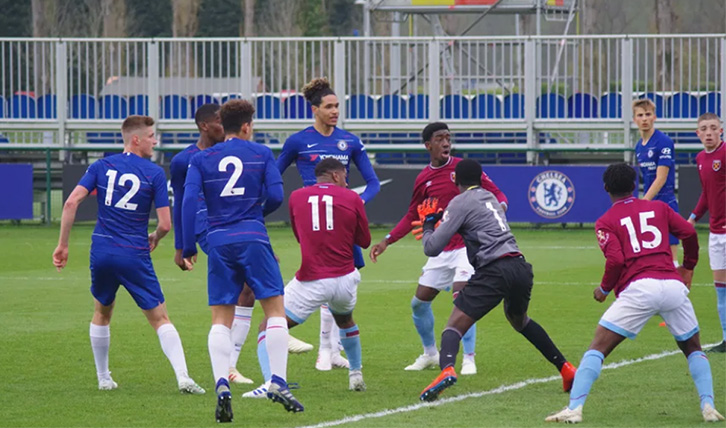 Amadou Diallo’s penalty put the Hammers in front before the quarter-of-an-hour stage, but they were pegged back shortly after when George Nunn equalised.

And things remained all square until eleven minutes before time, when Manny Longelo thought he had won it for Jack Collison and Mark Phillips’ side, but Pierre Ekwah Elimby cancelled out the Hammers’ strike once again and the sides were forced to split the points.

“It was our best all round team performance of the season,” said a spirited Phillips after the match. “All 13 players involved deserved great credit.

“Chelsea have won this league for the last seven years and we had U16s in our team for the whole game. To come away with a point is fantastic for us and I thought we played really well.

“Given we went in front twice, we’re frustrated not to have got all three points but that’s the way it goes sometimes and we’re happy with the draw.”

Chelsea got on the ball more frequently early on but it was the visitors who went in front when Dynel Simeu clipped the heels of Veron Parkes inside the penalty are. Diallo stepped up and confidently dispatched the spot kick, firing into the bottom left-hand corner.

The Blues were back on level terms not long after, though, having already found the back of the net before only for it to be ruled out by the linesman’s flag. This time, there was no doubt about the goal as Nunn converted from close range from James Clark’s low cross.

Soon after, the Hammers went close when the dangerous Parkes struck a powerful half-volley from outside the box, and it whistled just over the crossbar.

Before the half was out, Chelsea struck the woodwork twice, and Parkes had the ball in the net at the other end, but once again an assistant referee’s flag was raised.

Into the second period, with both teams battling to take control, neither stopper was tested too much, and Longelo’s dragged shot was the closest West Ham came to begin with.

However, with just over ten minutes left on the clock, cue the celebrations for the Hammers. Longelo was first to react to a loose ball in the box, firing in and in turn giving West Ham thought was a goal to secure all three points.

But the hosts came fighting back, and within two minutes were level once more. A corner kick was West Ham’s undoing, with Serine Sanneh in the Hammers’ goal failing to push the ball away and Ekwah Elimby sweeping the loose ball home from 12 yards.