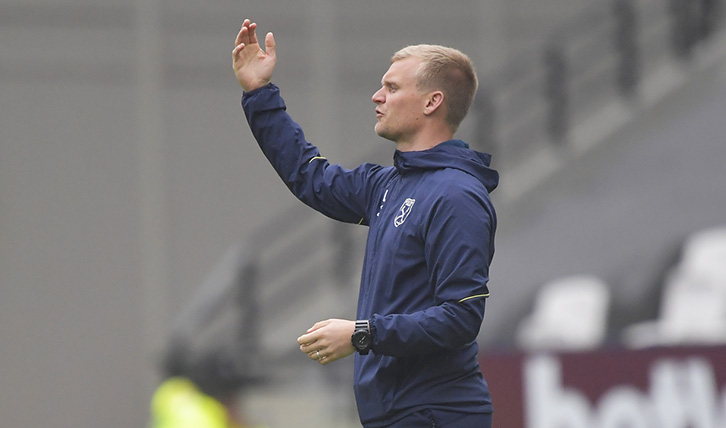 The Hammers picked up the win at London Stadium thanks to Dan Kemp’s second half penalty, a result which moves them out of the relegation zone as they approach the campaign’s final two matches.

The vital victory was secured by in-form winger Kemp, who was fouled in the penalty area and stepped up himself to confidently dispatch the spot-kick.

And Manning, who was pleased with his side’s display, labelled the result a “massive” one.

He said: “It was a big goal and it’s a big result. It obviously gives us a chance of staying in the league and we have two big games to go. Overall, I thought we deserved it, to be fair.

“I thought we played some really good stuff at times. We turned it over a little bit cheaply sometimes, but overall, in terms of being able to play how we want to, the surface allows us to do that and there were some passages where we really controlled the game with the football. We said at half-time, have more purpose and look more of a threat, and give the lads credit, we did that second half.

“We looked much more like creating more and hurting them more second half and I thought the lads did really well.

“I thought that it was the final bit where we were lacking in the first half. At the back and mid-third, we were really, really good – similar to the Arsenal game. It was just a case of having a bit more belief and being more selfish at times, to get shots off or be more direct in the attacking third. I thought we did that in the second half. We won by one, but in the end it could have been by one or two more.”

Goalscorer Kemp was shortlisted for the Player of the Month award for March in Premier League 2 on Friday, and is in red-hot form having scored four times in as many games.

Overall, I thought we deserved it. The biggest positive was how we stuck together as a team and ground out the result. We did the not-so pretty side really well.

Manning praised the No7 for his shining performances and urged him to keep it up as the team approach the end of the season.

“Dan is playing really well at the moment,” the boss continued. “He is working extremely hard every day and he’s got a great attitude. He’s getting into more effective areas and I think he was a bit annoyed with the one he missed because he did really well on that.

“We always said it would take time after his injury and he’s now starting to show that form he was in before the injury. He needs to keep doing what he’s doing now into our last two big games.

“The message won’t be any different; don’t focus on the result, focus on the action which gets you that. So focus on working hard, focus on competing and building on what we’ve done last few games. We’ve played really well in those and if we continue like that, we’ll win games. So two big games and hopefully we can pick up some points.”

West Ham were easily beaten 3-0 earlier this season by Leicester City but got their revenge in E20, something which added further joy to the result for Manning.

“Earlier in the season against Leicester, it was possibly our worst performance this season when we went up there. Credit to their coaches; you know what you’ll get from their teams. They’ll run hard, be physical, give everything and they’ll get the ball forward and put crosses in. I thought we stood up to that well.

“The biggest positive for us if you look at the result as an overview was how we stuck together as a team and how we ground out the result. We did the not-so pretty side really well.”