Support the U23s at London Stadium 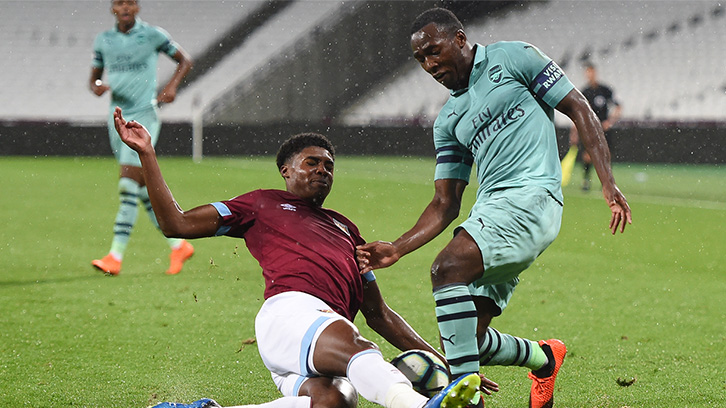 West Ham United’s U23s will be hoping to climb out the relegation zone in Premier League 2 Division 1 on Sunday as they take on Leicester City at London Stadium.

The huge fixture, which West Ham United Season Ticket Holders and Claret Members can attend for free, could play a huge part in the Hammers’ season as they approach the climax of the campaign.

Three points from safety in the top flight, West Ham go into the match – knowing all three points would lift them above London rivals Tottenham Hotspur and Lancashire outfit Blackburn Rovers on goal difference before the mentioned pair take on each other the following day.

Sunday will be the second time the U23s play at London Stadium this season and third time in April, with the side’s final game of the term also in E20 when league-leaders Everton visit.

A trip to Derby County’s Pride Park is sandwiched in-between with Liam Manning and Steve Potts’ side knowing all three of their final fixtures will be vital.

West Ham will be hoping to get their revenge on the Foxes on Sunday, who were 3-0 winners back in October, albeit against a very young Hammers side who fielded their youngest-ever ‘reserve’-team player.

Jayden Fevrier was involved that night, and his age of 15 years, six months and 12 days broke the previously-set record belonging to current first team skipper Mark Noble, who was two-and-a-half months older at the time of his debut.

Tickets for Sunday’s fixture are free for Season Ticket Holders and Claret Members, though seats must be booked in advance. Supporters can do so here. Alternatively, tickets are priced at £5 for adults and £3 for concessions.