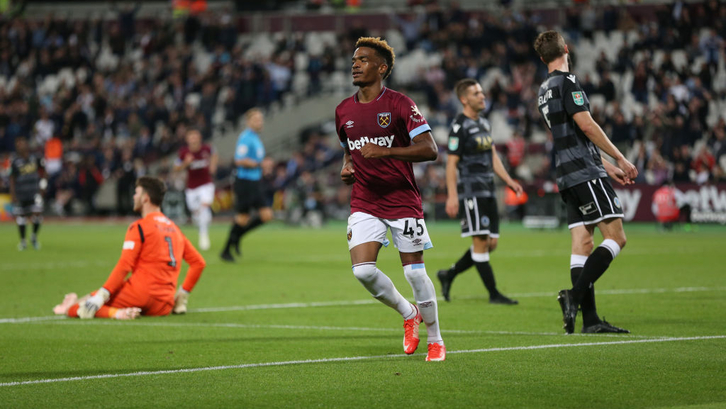 Manuel Pellegrini says he handed Grady Diangana his debut against Macclesfield Town after he impressed the West Ham United coaching team in training.

The 20-year-old was awarded his first start for the Irons on Wednesday and immediately showed his quality to the home supporters, scoring twice in the 8-0 victory.

While Pellegrini was delighted with how Diangana performed in the midweek Carabao Cup clash, the Chilean was not shocked to see the winger playing so well, having seen the Academy graduate's quality in training.

"I think that Diangana played exactly the way he worked in the week," Pellegrini said. "That's why he started the game, because he was working very well with us. Maybe some players, when they have the opportunity, they don’t have the personality to do what they want to do but I think he did very well from the first minute."

I think that Diangana played exactly the way he worked in the week. He's a young player who had the personality to play the same way he plays on the training ground

Diangana was informed on Wednesday morning that he would be playing in the evening's fixture, and Pellegrini also revealed what he told the youngster prior to making his West Ham debut.

He added: "I spoke with him before the game and told him that I want to see the same player that I see working during the week. He has a lot of talent, not only for the two goals that he scored, because he didn’t lose the ball, he was playing deep balls.

"He's a young player who had the personality to play the same way he plays on the training ground."