Diangana: I never thought my debut would be so amazing

Grady Diangana has admitted he never believed he would enjoy such an impressive debut for West Ham United, after scoring twice in the 8-0 win over Macclesfield Town.

The 20-year-old was included in the starting XI for his first ever senior side appearance on Wednesday, and promptly repaid Manuel Pellegrini’s faith with a sensational performance.

After impressing with his fearless attacking in the first period, the winger scored twice in the second to mark his debut, and Diangana says he didn’t even predict such a game for himself.

“I never thought my debut would be like that,” he told West Ham TV. “I’ve always dreamed about it, but for it to actually happen, I never really expected it.

I never thought my debut would be like that. I've always dreamed about it.

“The first goal I picked up in the middle and I’ve turned, and tried to make space to shoot. I saw Powell and played the one-two, and I shot in with my right. For the second I saw the space in behind, Powelly played me in and I was able to just finish.

The Academy graduate was one of three players to make their West Ham bow on Wednesday, with Conor Coventry and Joe Powell coming off the bench for the Irons.

Diangana revealed it was only on the day of the game that he was told he was starting the match, and the encouragement given to him by the coaching staff and his fellow players spurred him to a top performance. 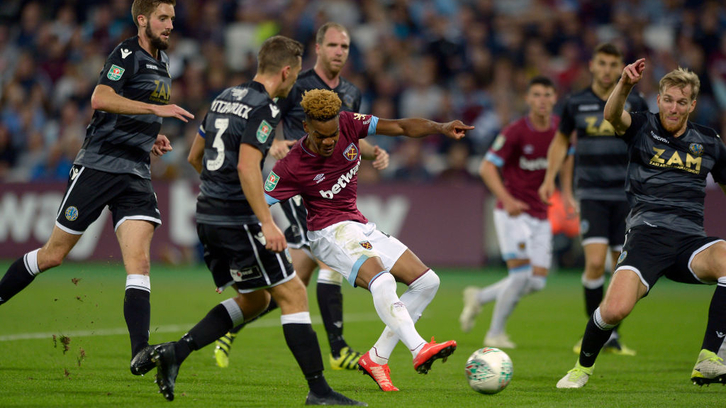 He continued: “It was only this morning that I found out that I would be starting. I just tried to get my own mind ready, and I’m really happy for the result.

“The first thing I was told by the manager and the staff was to be fearless and enjoy myself. They wanted me to play simple in the middle third, and express myself.

“The experienced players made my debut really easy for me. They spoke to me before the game and during the game, just giving me advice.”

Having now made such an impressive first appearance for the Hammers, Diangana is looking to continue improving and registering more showings for Pellegrini’s side.

“Hopefully I can kick on now. I want to keep getting opportunities and I will work hard for those opportunities.”