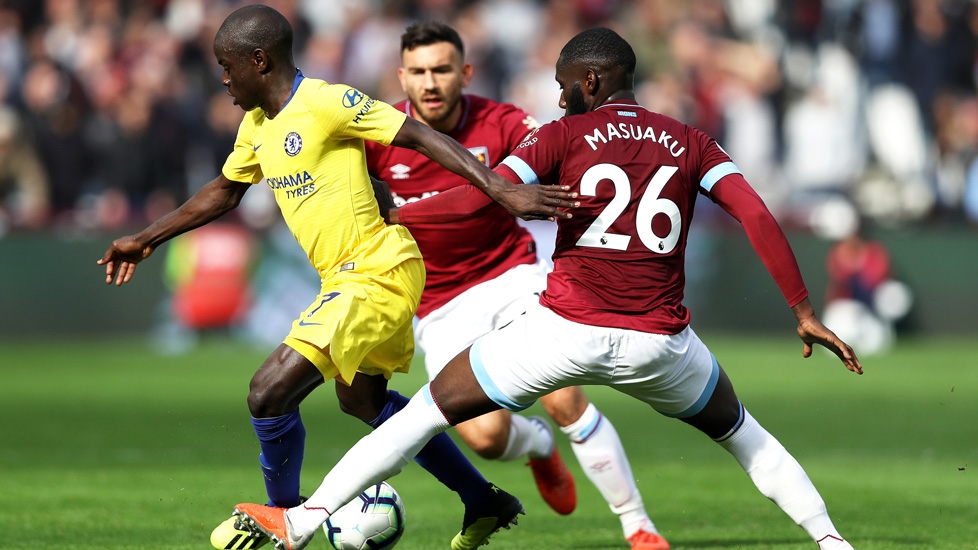 The Hammers built on last weekend’s victory at Everton by taking their first home point of the campaign – and it could have been all three with both Michail Antonio and Andriy Yarmolenko going close to breaking the deadlock.

At the other end, the Hammers did exceptionally to ensure Chelsea’s 72 per cent possession did not yield a host of chances.

When they did get through the defensive line, Lukasz Fabianski was there to make saves from Alvaro Morata and Ross Barkley and ensure the scoresheet would remain blank.

Chelsea established the pattern of play early, hogging the ball and using Jorginho to build the play from the base of midfield.

With nine minutes played, Willian delivered a corner from the right flank and Olivier Giroud found space inside the box, but directed his effort down and into the hands of Fabianski.

West Ham were having to defend, but when they did force a turnover there was space to exploit in behind Chelsea’s full-backs.

With 29 minutes played, one such opportunity arose when Felipe Anderson burst beyond Cesar Azpilicueta and slipped a ball through to Antonio. The No30 was faced only by Chelsea goalkeeper Kepa, but opted for power and fired wide of the near post.

Two minutes later and the Hammers broke again, this time through Yarmolenko on the opposite flank. He was halted in the box, but the ball ran past David Luiz and to Antonio, who was denied by Kepa’s legs from point blank range.

West Ham were doing a good job of limiting Chelsea’s opportunities, but they were reminded of their danger right on half time when the elusive Eden Hazard broke out of a challenge and sprayed the ball out to Willian on the right. He volleyed square and N’Golo Kante headed wide under pressure from Issa Diop.

Ten minutes into the second period David Luiz headed over from a Willian corner when he ought to have hit the target.

Fabiankski hadn’t had much to do, but he reacted brilliantly to save from Alvaro Morata midway through the half, throwing himself at the Chelsea sub to save with his face after the ball broke for him in the box.

Just like the first half though, Chelsea were not making use of their possession and they should have been punished 13 minutes from the end.

West Ham were patient in building their attack down the left, ending with Snodgrass whipping over a delicious cross to the far post where Yarmolenko headed wide with Kepa rooted to the spot.

Fabianski needed to dive low to his left to tip Ross Barkley’s curler behind in the last minute, but the Hammers had done enough to earn their point.