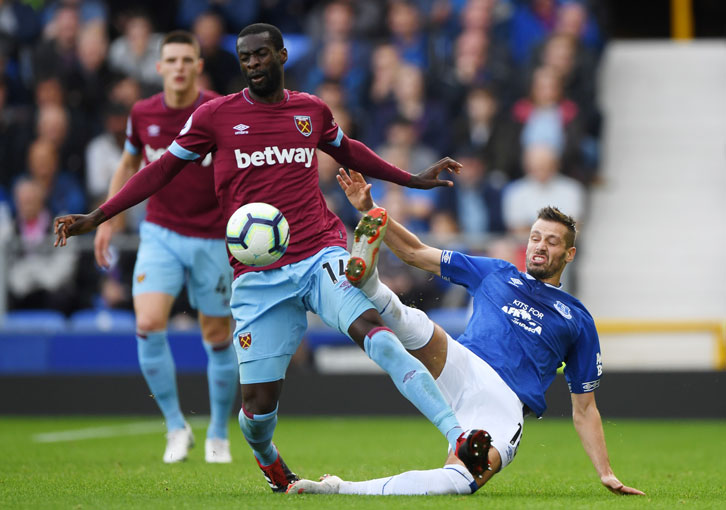 Andriy Yarmolenko and Marko Arnautovic scored the goals and dominated the headlines after Sunday’s 3-1 Premier League victory at Everton.

But without the performances of two unsung heroes in the centre of the West Ham United midfield, Manuel Pellegrini’s birthday may not have ended with the victory the manager had put top of his wish list.

Declan Rice had not appeared in the Premier League since being replaced at half-time in the opening-day defeat at Liverpool, while Pedro Obiang had played just 26 minutes of top-flight football as a substitute in the 1-0 home defeat by Wolverhampton Wanderers a fortnight ago.

Despite their relative lack of recent match action, however, both players were imperious at Goodison Park.

Sitting deep in an anchor role in front of the back four, Rice showed maturity, composure and strength that belied his tender years, snuffing out repeated Everton attacks and regularly putting his team on the front foot with incisive, intelligent passes.

Only Felipe Anderson attempted more passes than the teenager’s 40, with 33 of those successfully reaching their target for an 82.5 per cent completion rate.

Defensively, Rice was outstanding, recovering possession more times (eleven) than any other player on either side, making a team-high five tackles, three clearances, an interception and blocking two Gylfi Sigurdsson shots.

Perhaps the only blot on the No41’s copybook was the yellow card he was shown for pulling back Blues substitute Oumar Niasse in the closing stages but, even then, the decision halted an attack that ultimately led to nothing when Sigurdsson’s free-kick thudded into the defensive wall.

After a difficult afternoon at Anfield, Rice returned with a peerless performance at the other end of Stanley Park.

It would be surprising if his name is not in the starting line-up when West Ham host his former club Chelsea at London Stadium next weekend.

The same can be said of Obiang, whose all-round qualities came to the fore at Goodison, where he led West Ham’s players in distance covered with 11.67km – with Rice next on 11.31km.

The Spaniard completed 29 of his 36 pass attempts for an 80.6 completion percentage, with one of those providing an inch-perfect assist for West Ham’s match-clinching third goal.

Indeed, Obiang was involved twice in the lead-up to Arnautovic’s strike, collecting an infield pass from Mark Noble and exchanging passes with the Austrian before confidently dribbling in to the Everton penalty area, drawing the home defence and creating space for the No7 to convert his low cross.

With captain Noble also back to his effervescent best, West Ham’s three-man midfield more than matched their adversaries, winning their individual battles with Idrissa Gana Gueye, Morgan Schneiderlin and Sigurdsson – the Icelander’s first-half header aside – to provide the platform for Pellegrini’s birthday victory.

Looking compact and in sync, the trio could be vital to West Ham's chances of building on their first three points of the season when they host the in-form Blues on Sunday.