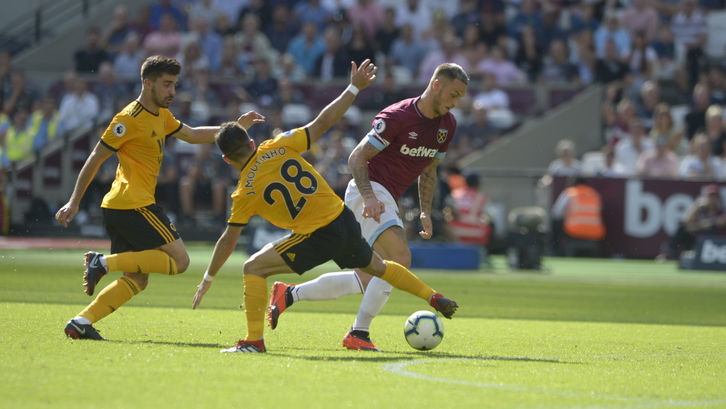 Michail Antonio had a header, which looked destined for the top corner, clawed away, before Marko Arnautovic’s powerful shot in a one-on-one position was denied by the goalkeeper’s face.

As the final minute of the game was being played, Wolves stole possession in the midfield and broke, releasing Adama Traore to fire home.

An early chance fell for the Irons in the fourth minute after some exquisite play from Felipe Anderson. The Brazilian saw a shot saved on the edge of the box, which Marko Arnautovic followed up, but his cross was cleared away.

The visitors then had a decent opportunity to take the lead through full-back Matt Doherty, who attempted a shot after a cut-back by Diogo Cota. Lukasz Fabianski was equal to the effort.

Wolves then saw a headed effort go over the bar before Michail Antonio won the team a corner, after his flicked effort was turned away. Robert Snodgrass then saw a low-shot saved after good work by Aaron Cresswell.

The N030 had another opportunity to put West Ham’s in front just ahead of the final whistle as Ryan Frederick played in a looping cross. The ball was met by Antonio, and the header bounced towards the far post, but was just wide.

The start of the second period came with more intensity from Manuel Pellegrini’s side, and a glorious opportunity presented itself after 50 minutes as Fabian Balbuena rose highest for a free header in the penalty area. The Paraguayan’s powerful effort bounced wide.

Exceptional footwork from Jack Wilshere saw the Englishman combine with second-half substitute Andriy Yarmolenko, before Antonio had another effort. This time the No30’s header was excellently clawed away by Patricio.

It was then Fabianski’s turn to make a pair of outstanding stops. Jimenez went close with a header before the Mexican striker went in one-on-one. Once again, Fabianski was more than capable of stopping the strike.

Pedro Obiang attempted a strike from distance, which was wide at the near post, before Wolves had their best chance of the game. Jimenez collected the ball in a fantastic position, but couldn’t get it out from under his legs, allowing the Hammers to clear.

Then came West Ham’s best chance. Arnautovic combined well with Chicharito, with the Mexican releasing the Hammer of the Year. Some great skill from our No7 put him past Conor Coady, but the strike was incredibly saved by Patricio.

It would prove to be crucial as, as extra-time ticked towards the final whistle, Ruben Neves caught Carlos Sanchez in possession. The midfielder released Ruben Vinagre, who played in fellow substitute Troare. The winger’s strike found the net.