Irons out of Carabao Cup after Tottenham defeat 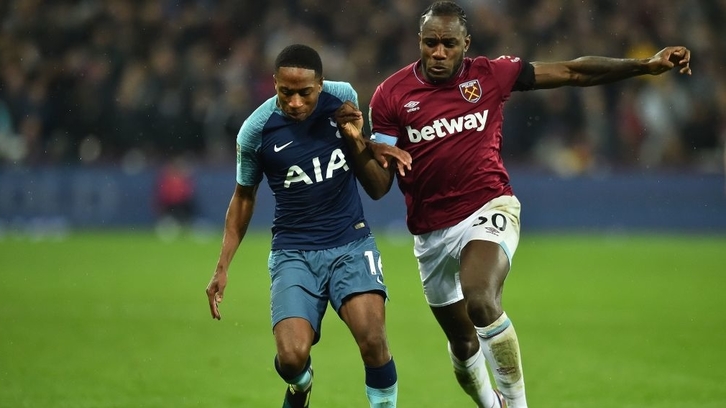 West Ham United’s 2018/19 journey in the Carabao Cup came to an end on Wednesday night after a 3-1 home defeat to Tottenham Hotspur.

Despite threatening through Michail Antonio and Grady Diangana, the Hammers went in at half-time one goal down after Son Heung-Min’s finish into the roof of the net.

Spurs went 2-0 up just ten minutes into the second period as Son again netted, rounding Adrian to finish, before substitute Lucas Perez gave the home supporters hope of a comeback with header on 71 minutes.

However Fernando Llorente struck to put Tottenham 3-1 ahead and take West Ham out of the competition at the fourth round stage.

West Ham had the first chance of this midweek derby, as Pedro Obiang received the ball to the right of the goal. The Spaniard unleashed a powerful shot, but it was over the bar.

The Irons’ offside trap stopped Tottenham from putting the ball into the nine minutes, while the Hammers had a great opportunity to take the lead when Diangana found Chicharito. The Mexican tried to cut the ball back for Antonio, only for the ball to go out for a corner.

Spurs took the lead just minutes later. A pass from Angelo Ogbonna was intercepted by Fernando Llorente, who played the ball forward to Dele Alli. The midfielder’s flick was met by Son, who fired home.

West Ham went instantly on the look for an equaliser, with Antonio seeing a curling effort blocked out for a corner. The No30 was then through on goal, only for Juan Foyth to block his effort.

Two efforts in the last five minutes were spurned too as Chicharito struggled to get the ball out from under his feet in a dangerous position, before a set-piece routine was smothered by Paulo Gazzaniga before Antonio could head the ball home.

The introductions of Arnie and Perez put a lot more attacking intent in for the Hammers, who crafted two half decent chances.

The Hammers showed serious attacking intent in the opening moments of the second half, with Foyth again denying Antonio from getting a shot away.

However, Spurs went two goals ahead on 54 minutes. A ball from Christian Eriksen pinged off Masuaku to Son, who raced clear and slotted coolly past Adrian to double the away side’s advantage.

The introduction of Marko Arnautovic and Lucas showed the desire to get back into the game, and the change paid off on 71 minutes after a flurry of opportunities for the home side.

Robert Snodgrass’ corner was met at the back post by Lucas, who the ball downward into the back of the net.

The chance of getting back into the game was short lived, however, as Llorente volleyed home from a corner to score Tottenham’s third and eliminate the Hammers from the Carabao Cup.