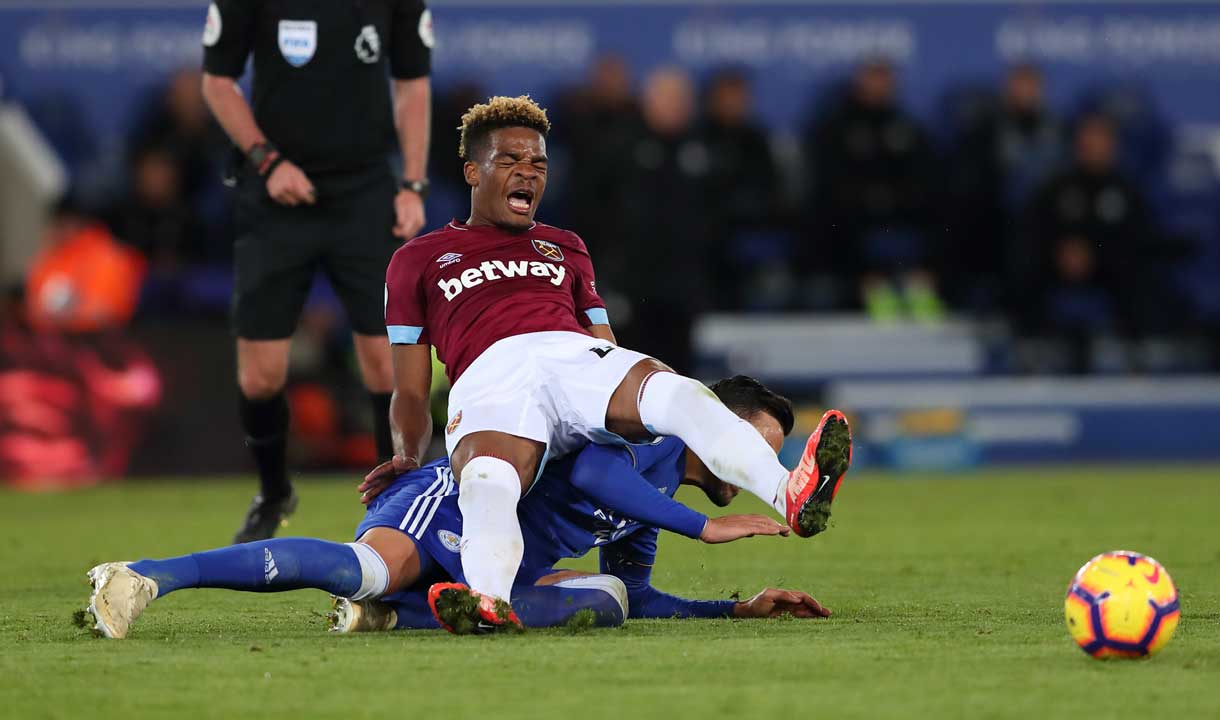 The Hammers had to make do with a man light for 53 minutes of the King Power Stadium clash after Mark Noble was shown a red card for catching Ndidi with his studs in a sliding challenge.

At that point the visitors led 1-0 thanks to Fabian Balbuena’s first goal in Claret & Blue, and it looked as though it was going to stay that way until the end as Manuel Pellegrini’s men defended stoutly.

But they were undone right at the death and had to settle for a point to take back down the M1 with them.

An illness for Marko Arnautovic meant the Hammers had to do without their top goalscorer, and Chicharito took his place up front in one of three changes Pellegrini made to his side.

Leicester had the ball in the net with just two minutes played, but the offside was rightly raised against Kelechi Iheanacho after he strayed beyond the last man to reach Marc Albrighton’s cross.

The Hammers then had to defend two dangerous inswinging corners from James Maddison as the home side started strongly, but Pellegrini’s men drew that early sting and began to get on the ball themselves.

Robert Snodgrass almost profited from some hesitant defending on 24 minutes but fired across the face of goal with his left foot from an angle.

Felipe Anderson’s clipped delivery found Declan Rice at the far post, and his knock-back was headed goalwards by Balbuena. The initial effort struck the inside of the post, but the Paraguayan reacted quickest to stab the loose ball home.

Leicester’s hopes of getting back into the game were boosted on 37 minutes, however, when Noble was sent for an early bath after he caught Ndidi with his studs.

Claude Puel introduced Jamie Vardy at the interval in a bid to increase his team’s firepower, and they upped the tempo as the second half got underway, with Balbuena having to block from Iheanacho on 57 minutes.

The Foxes were getting closer, and midway through the half Harry Maguire’s header from another Maddison corner bounced off the top of the crossbar.

At the other end Angelo Ogbonna headed wide with his first touch from Robert Snodgrass’ free-kick, but Leicester levelled in the cruellest way in the final minute.

Ndidi’s shot from 25 yards didn’t look like it was going to trouble Fabianski until it took a wicked deflection up off Balbuena’s back and into the top left corner.