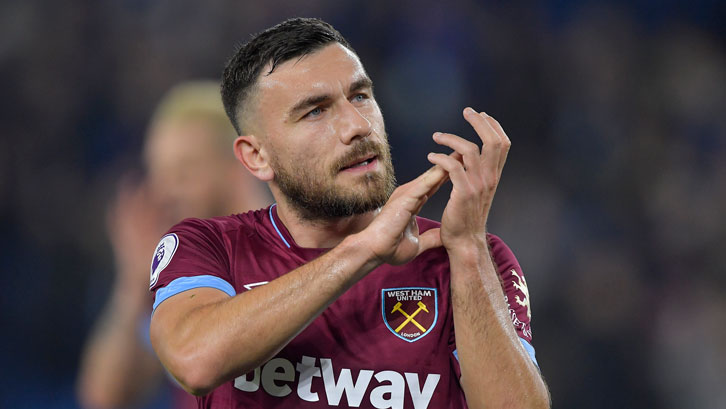 Robert Snodgrass says West Ham United will go to Leicester City and try to win the game for Andriy Yarmolenko.

The Ukraine international has been ruled out for an extended period after suffering an Achilles injury in last weekend’s Premier League fixture with Tottenham Hotspur at London Stadium.

Yarmolenko underwent successful surgery on Monday before posting a social media video thanking fans for their support, and Snodgrass wants the players to show solidarity with the winger by producing the goods at the King Power Stadium.

It’s one of the toughest moments of your life so I just said to Yarmo, you’ll come back stronger because it’s the type of character he is – he’s a top lad

“Yarmo has got a good family and friends around him, he’ll have the support of his teammates and the fans so everybody is wishing him a speedy recovery and we’re all there for him,” said the Scotland star, speaking with the knowledge of his own long-term injury, a dislocated kneecap that ruled him out for more than a year.

“I spoke to Yarmo and told him I was out for 16 months and the biggest thing you need to do is not let it be any fault of your own if you don’t come back to the same level; let the injury be the problem, not you because you’ve not been professional coming back from an injury.

“It’s one of the toughest moments of your life so I just said to Yarmo, you’ll come back stronger because it’s the type of character he is – he’s a top lad.

“It’s important we all rally around him and give him the support he needs because it’s a big injury and he’ll need to be careful in his approach coming back, because the biggest thing in being a professional is you don’t want to try and push yourself too quick, because that’s when the injury reoccurs.

“He’s in good hands, we’ve got a good medical team here, good lads to show him support and give him everything he needs, so we’ll be there for him.”

West Ham travel to Leicester seeking to turn improved performances into points, having lost 1-0 in each of their previous two Premier League matches at Brighton & Hove Albion and home to Tottenham.

Snodgrass concedes that nothing will come without hard work at the King Power, but he believes the Hammers have enough to win at the home of the Foxes for the second straight season.

“We’ll be going there to try and win the game – playing the right way again,” he said. “After the Spurs game I said we could have sat back in a 4-5-1 against a top-four side, but I don’t think that’s the way the players want to play here.

“If you bring in £100 million worth of talent, you want to go and express yourself and try and play and that’s the way the manager wants to do it and it will be no different Saturday.

“They’re a very good team, Leicester – they’ve got some good players who’ve been about the PL for a few years now so it will be a tough game.”