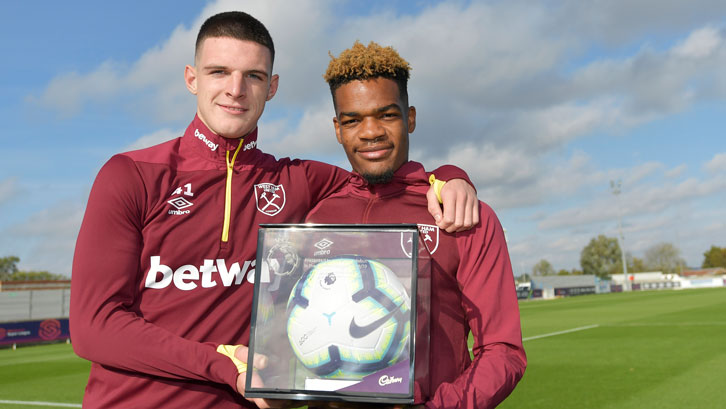 Academy of Football graduates Declan Rice and Grady Diangana have spoken of their pride after being presented with Premier League Debut Footballs.

The West Ham United duo were rewarded for making it to the highest level of English football by being handed the special commemorative balls by Academy Director Terry Westley, former Hammer Carlton Cole and the Premier League’s Games Programme Manager James Westlake at Rush Green.

Both youngsters made winning starts, with Rice making his bow in a 2-1 success at Burnley in May 2017, while Diangana was handed his debut by Manuel Pellegrini in the recent 3-1 victory over Manchester United at London Stadium.

Rice has made the most of his opportunity since breaking through and is now closing in on 50 senior appearances in Claret and Blue, but he knows there is still much work to be done to establish himself as a Premier League regular.

“My debut was probably the most memorable day of my career so far, playing in the Premier League and achieving what every kid’s dream is,” said Rice. “Even though it was only a couple of minutes, it was very special because I came on the pitch with the likes of Manuel Lanzini and James Collins, we won away at Burnley and my family were there as well.

“It was the last day of the season and I couldn’t wait for the next season to start. Without a doubt it’s hard to stay [in the Premier League], but if you work hard and have talent you can get anywhere. That was the main thing for me, as I knew I hadn’t made it as I’d only played a few minutes in the Premier League, so I knew I had to kick on and I knew I had to get better and there was so much of my game I had to improve and it’s still the same case now.

“I made 35 appearances last year and have started some again this season and I just want to keep doing that and playing games here as that’s the most important thing for my development.”

“It really doesn’t get much better than that,” he said. “It’s something I didn’t dream of, it coming against Manchester United in a 3-1 win at home. To be given the opportunity, I’m grateful.

“I had to be really patient, build my game slowly and progress my game and I think it’s all coming together at the right time. At the start of the season I had a back injury, then another little niggle, but my game picked up, I had a few good runs in the Under-23s and the opportunity came.

“This is what I want. For me, I think I developed my talent since I was young and my mindset is something I want to keep developing and getting stronger. For me, the belief I’ve got in myself now, I believe I can hopefully make a difference to the team and to be in and around things would be great.”