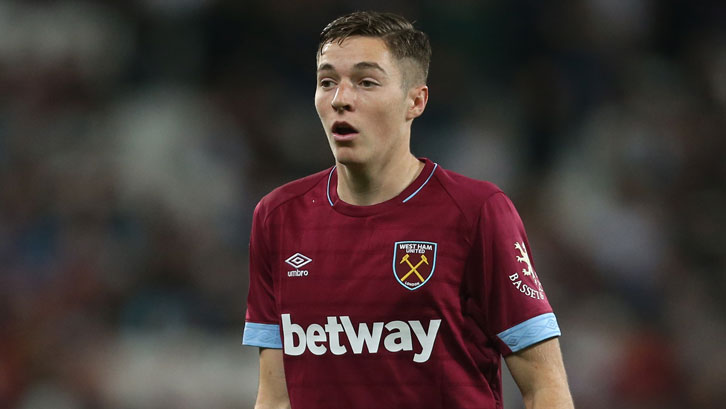 Conor Coventry is hoping his dream 2018 continues when he takes to the field for the Republic of Ireland in a trio of important UEFA European U19 Championship qualifiers this week.

The 18-year-old midfielder is expected to be a central figure as the Boys in Green kick-off their challenge for a continental title by facing Bosnia and Herzegovina, the Faroe Islands and the Netherlands in Longford.

And, with the memories of winning a Dylan Tombides Award and an outstanding West Ham United debut in the 8-0 Carabao Cup win over Macclesfield Town fresh in his mind, Coventry is relishing the opportunity to play in three more big games.

“I think it’s been good start to the season,” he said. “The highlight was obviously the Macclesfield game, which I didn’t really expect coming into the season.

“It’s been a massive feeling for me and it was a night that could not have gone any better. It has just made me hungrier for more of that feeling.

“I just want to keep training with the first team whenever I can and get into more squads and keep trying to play well and doing my stuff in the Under-23s.”

Before he returns to club commitments, however, Coventry has the small matter of Euro U19 qualifiers to contend with, starting with Wednesday afternoon’s Group 10 clash with Bosnia and Herzegovina at the City Calling Stadium.

“The qualifiers we’re about to play in are the first qualifying phase for the U19 Euros next summer,” the young Hammer confirmed. “In our group, we’ve got Bosnia and Herzegovina first, then the Faroe Islands and then Holland and the top two go through, so we probably need a couple of wins to get through to the next round, which is played in March next year.

“Obviously being at home is a massive advantage, but I think we’d expect to go through, even if we were playing away from Ireland because we want to put that type of pressure on ourselves.

“Being at home gives us an extra little edge, but we’ve got enough quality in the squad to not just go through, but win the group.”
For Coventry, playing internationals not only presents him with an opportunity to experience a different style of football, but also to spend time with a squad he has been part of for the past three seasons.

“I love meeting up with the squad,” he smiled. “I’ve known the boys for a few years now so there’s a great bond there. The main thing for all of us is playing for our country, which is a massive, massive honour.

“There’s so much pride in it and when we come together everyone is buzzing and ready to give everything for the shirt.”