Rice: We want to stay positive and look forward to Spurs

The Hammers’ four-match unbeaten run came to an end in frustrating circumstances as, despite dominating the ball and territory for long periods, missed chances and one defensive lapse meant Glenn Murray’s first-half strike was the only goal of the game.

But teenager Rice, who was in fine form again at the Amex, believes the team’s recent improvement means that they can still prepare for the visit of Tottenham Hotspur on Saturday week with confidence.

We don’t want to get on too much of a downer after Friday night. We want to stay positive and look forward to the Spurs game

“There were positives,” he told West Ham TV. “We had 70 per cent possession [in the second half] and you want to turn that into one or two goals and come away with a point at least, but we missed some gutting chances if we look back on it.

“We’ve got to be positive, go again and obviously it’s Spurs next. Spurs is always a massive game, we had some great results against them last season and we’ve got two weeks now where we need to fight and be ready to get back to winning ways and three points.”

West Ham were made to pay for their slow start at Brighton, where a determined home side and enthusiastic home crowd combined to put the visitors on the back foot in the opening quarter of the game.

By the time Manuel Pellegrini’s team had recovered, they were a goal down but, despite creating 14 goal attempts, including ten in the second half, the Seagulls held out.

Secure your Spurs seat now via the Ticket Exchange!

“If you look back on the game, with the amount of chances we had, we were unlucky not to come out with something,” Rice observed. “It was a sloppy goal to concede and the first 20 minutes were a bit flat but, from then on, I think we dominated the game with our passing.

“Fair play to Brighton, they were hard to break down and we’ve got to do a little bit more to put it in the back of the net.

“You know when you come to Brighton what they’re going to be like. They’re a good side with high intensity and they fight for every ball and every second ball and we needed to get to grips with them early on. We didn’t quite do that first 20, but from there on in I thought we fought for everything and were unlucky not to come out with something from the game.” 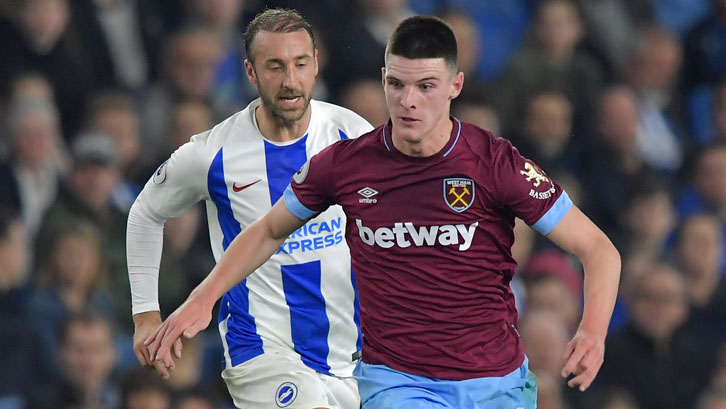 Defeat means that, after eight Premier League matches, the Hammers sit in the bottom half of the table, so how does the No41 sum up the opening quarter of the campaign?

“It’s been a mixed bag, to be honest. We started slow and had some results where should have taken something against Wolves and Bournemouth, but the last four games we’ve been excellent.

“We don’t want to get on too much of a downer after Friday night. We want to stay positive and look forward to the Spurs game.”