Cresswell: It was great for Andy to get back out there 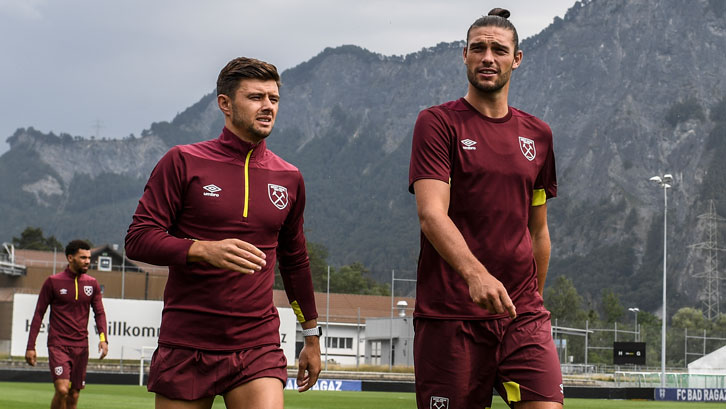 Aaron Cresswell is backing Andy Carroll to ‘really push on’ after the centre forward made a winning return from injury for West Ham United.

The pair, who have been teammates since Cresswell arrived from Ipswich Town in 2014 and are close friends, were part of a Hammers team which beat Championship side Brentford 2-1 in a friendly on Thursday.

And, having come through 45 minutes on his comeback following four months out with an ankle injury, the left-back is backing his pal to make a big impact for the Irons over the coming weeks and months.

“It was great for Andy to get back out there,” said Cresswell. “He’s had a frustrating start to the season after what happened in pre-season and it’s obviously never easy for anyone with injuries.

“It was fantastic to see him back out there and hopefully now he can get more minutes and more games under his belt and really push on, as we all know what a handful Andy can be for anyone to defend against.”

Reflecting on Thursday’s game as a whole, the No3 said manager Manuel Pellegrini will have been happy to see his non-international players get valuable game-time in their legs during an otherwise fixture-free week.

Robert Snodgrass and Chicharito got the goals at Griffin Park, but Cresswell said the result was of secondary importance to maintaining fitness levels ahead of the busiest period of the season.

“It was good to get minutes under our belts, as obviously two weeks is a long time not to have a competitive fixture during the season.

“It was all about fitness and it was a good run out. It was a decent game, played at a good tempo.

“Brentford played some good stuff, too. I’ve watched them a few times this season and last and they’re a good team, but it wasn’t about anything else rather than fitness and that’s what we got from the game.”

The West Ham squad – those not away with their countries, at least – now have a weekend off to recharge batteries before returning to Rush Green on Monday to continue preparations for the visit of Premier League leaders Manchester City.

And with eight games to play between now and the New Year, Cresswell knows the Hammers have to be ready for a month which could define their season.

“Everyone knows December-time is crazy with the number of fixtures, so we’ll need more than eleven players, we’ll need the whole squad and a togetherness to pull us through into January.

“It’s a vital part of the season, for me, as you can pick up a lot of points in a short space of time and really push up that table.”