The Hammers manager took a 19-man squad to Griffin Park, where Andy Carroll returned from long-term injury, Chicharito scored and a number of fringe players enjoyed extended game time in a competitive environment.

The Irons were worked hard by their Championship hosts, much to the pleasure of Pellegrini, who knows his players will need to be at their sharpest when they host leaders Manchester City in their next Premier League game on Saturday 24 November.

It was good to see Andy play 45 minutes without any problems and he is always a player who, when he comes on the pitch, gives different things

“It’s a good match for the boys and particularly for the players who are maybe not playing in every game,” said the manager. “It was a very useful game because we played well, we played with intensity and so it was all OK.

“For Andy Carroll, for Lucas Perez, for Angelo Ogbonna, they all put in good performances. At this moment we don’t have space for them in the [Premier League] starting XI, but they worked very hard today.”

Carroll’s comeback from four months out with an ankle problem was a welcome sight, with the big centre forward looking fit and strong on his return to match action.

Pellegrini knows the No9 will provide a welcome option whenever he is available and is looking forward to unleashing the striker in the Premier League over the coming weeks and months.

“It was good to see Andy play 45 minutes without any problems and he is always a player who, when he comes on the pitch, gives different things, so I hope he can stay fit from now until the end of the season. He is always an important option.” 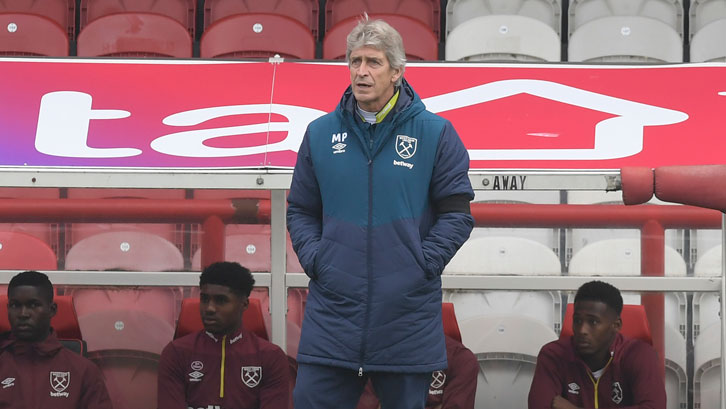 Another important option is Chicharito, who was in good positions all afternoon and might have had a hat-trick on another day.

As it was, the Mexican settled for scoring the match-winner from the penalty spot 12 minutes from time, after Brentford’s Emiliano had cancelled out Robert Snodgrass’s first-half opener.

“It was also good for Chicharito to play 90 minutes. He has a special season because he only arrived from the World Cup without a good pre-season before we started the first game, so we couldn’t start him.

“After that, he had a virus for more than one month, so he is getting fitter, playing minutes in every game and always, as a striker, it’s good to score. It doesn’t matter if it’s a penalty, it gives us more trust in him.”

The players will now have two days off before returning to Rush Green on Monday to prepare to face Pellegrini’s old club, Manchester City, and embarking on their busiest month of the season, with seven Premier League fixtures scheduled for December.

“I never managed against Manchester City when I was in Spain but, of course, it is a special game,” the manager confirmed. “They are doing very well this season, but I hope we can be competitive and try to win our points at home.”