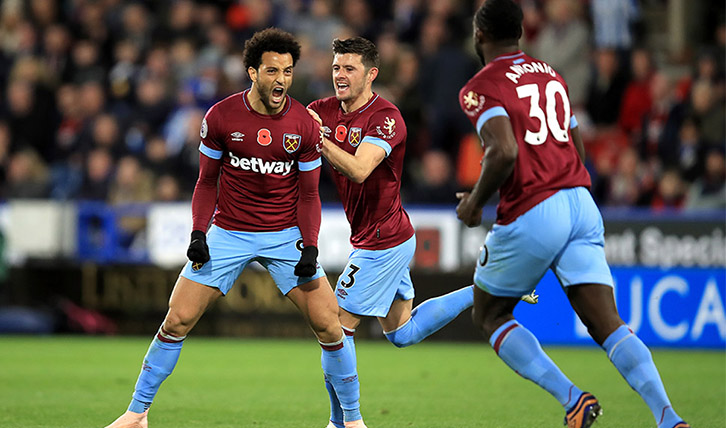 Felipe Anderson’s third goal in two matches earned West Ham United a point at Huddersfield Town on Saturday as the Brazilian’s equaliser cancelled out the Terriers’ early opener in an entertaining 1-1 draw in west Yorkshire.

Alex Pritchard squeezed in the game’s first goal after just six minutes during a frantic opening quarter of an hour at the John Smith’s Stadium in the Premier League.

But the Hammers – who had their chances throughout the fixture – fought back well and levelled the game with 16 minutes remaining when Anderson fired home from inside the box to make it 1-1.

The contest roared into life from the moment the referee’s whistle signalled kick-off. Inside two minutes, the hosts thought they had taken the lead when an Aaron Mooy corner was met by a firm Steve Mounie header. Luckily for the Hammers, goalkeeper Lukasz Fabianski was on hand to stretch high and tip the effort onto the crossbar.

From the resulting clearance, West Ham almost themselves took the lead. Marko Arnautovic broke down the right and fed Anderson, who cleverly worked himself some space before shooting, though his attempt on target was well blocked.

Two minutes later, an even better opening came the visitors’ way. A neat through ball from Grady Diangana found Arnautovic’s path, and as the Austrian bore down on goal, he was perhaps caught in two minds. Eventually, his near post shot was saved impressively from Lossl, who diverted it into the side-netting.

But on six minutes, the John Smith’s Stadium erupted into life when Pritchard grabbed the game’s opener. Declan Rice, receiving a pass from Anderson, could not retain possession, and the Terriers pounced quickly. Pritchard’s quick feet on the edge of the Hammers’ box worked the midfielder some wiggle room, and the former Tottenham man was able to slide into the bottom corner from 18 yards.

Ten minutes later, Town came mightily close to adding a second, though it would have been fortunate. Philip Billing’s deep cross from the left flew over the heads of everyone – including Fabianski in goal – and smashed against the post, before rolling across the goalline, clipping the other upright and falling kindly for West Ham to clear. 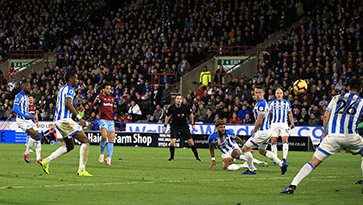 The Polish stopper was called upon once again just before the half hour mark. West Ham, again giving possession away cheaply, were the makings of their own problems as Mounie had the chance to double the hosts’ advantage, but Fabianski saved smartly – but comfortably – to keep the deficit at just one goal.

Chicharito was introduced as the second half began, and the Mexican’s impact was immediate. Within three minutes, he almost had the leveller, stabbing first against keeper Lossl before nodding a looping header onto the roof of the net with Town defenders rushing back to help out.

Just after the hour mark, again it was the Hammers’ No17 going close. Robert Snodgrass whipped in a dangerous corner delivery and, after Pedro Obiang flicked on superbly at the front post, Chicharito was inches away from turning in a far post equaliser.

But with 15 minutes remaining, the so far elusive leveller finally came. A cross from Snodgrass from the left-hand-side fell perfectly on a plate for Arnautovic, but the striker fluffed his lines. Luckily, Antonio was waiting and he effort was blocked, but there was Anderson to rocket an unstoppable strike into Lossl’s top-left corner and make it 1-1.

It was so nearly the perfect five minutes moments later for the Hammers. Snodgrass was again involved; the Scot’s corner was met brilliantly by a big Issa Diop header, but Mooy was there to nod off the line as it looked like the visitors would take the lead.

Both sides, looking to secure the three points, attacked with pace, threat and vigour as the game neared its end, however a winner never came, and the Hammers were forced to settle for a point in Yorkshire.