Manuel Pellegrini sat down with the media on Thursday afternoon to preview Saturday's Premier League fixture between his West Ham United and Huddersfield Town at John Smith’s Stadium.

The Hammers boss discussed a number of different topics, including the form of Declan Rice and Grady Diangana and the need to win back-to-back Premier League matches for the first time this season. Here is what the Chilean had to say...

Back-to-back wins will help us make up lost ground

It’s a team that fights for every ball as if it is the last one and just won its first game and lost against Liverpool just 1-0, so I think we are going to have to play a complete game in defending and attacking if we are going to win the game.

Our target is to recover points that we lost at the beginning, it doesn’t matter who we are going to play against.

We have 24 more points to play for before we finish the first round, so we will try to as best as we can in every game and recover the points and get to a more comfortable position in the table. 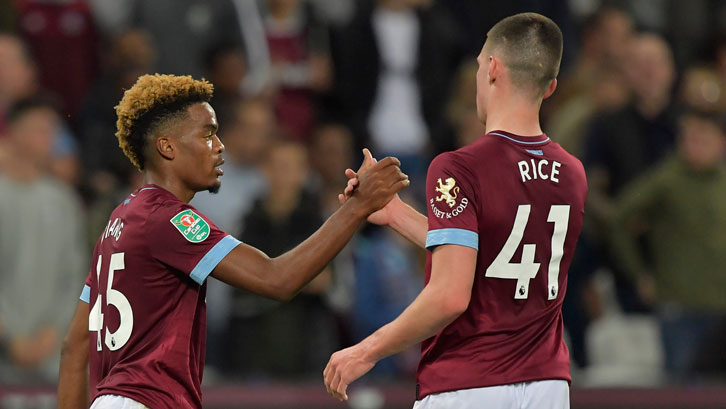 Declan is improving with every match he plays

I think Declan Rice has a lot of potential to arrive at the level that he wants to. After that, you must see the development of his career. He is learning a lot of things very fast.

I think he is improving his performance in every game, so I hope that he can be a top player in some years more.

He must continue learning because his position in the team is a very tactical position and filled by a very intelligent player, but I think he has a lot of potential.

He is a mature player for his 19 years because he is always listening. If you see young players, at the beginning they try to do what they think is best, but I think that Declan is always listening to us and what we are talking to him about what he must improve.

If you compare the first game that he played against Liverpool – not only Declan, but the whole team also – I think he has improved a little bit more in every game.

I was asked in my press conference if I have been impressed by the sudden impact Grady Diangana has made since coming into the first team.

I don’t know if the word is ‘impressed’ because I always see his work here at the training ground on a daily basis, but what is important for young players such as Grady is that he has the personality from the first day to do exactly the things he does here every day. He did it and, in every game, the same as Declan, he is improving a little bit more.

Now, for all the young players you have the second step, which is the most important thing.

At the beginning everybody sees everything you do because you are a young player, but after that he must grow another step, not make too many mistakes and continue to improve in every game he plays.