Hammers support Shrouds of the Somme

Ahead of Saturday's Remembrance game against Burnley, West Ham United is proud to announce their partnership with the Shrouds of the Somme, an extraordinary commemorative World War One art installation which is set to be unveiled at Queen Elizabeth Olympic Park next week.

To mark 100 years since the end of the First World War, 72,396 shrouded figures will be laid out in rows, shoulder to shoulder covering an area over 4000 square metres across the South Park Lawn, adjacent to London Stadium. Each figure represents a British serviceman killed on Somme battlefields, who has no known grave, many of whose bodies were never recovered from the battlefields.

All 72,396 figures have been made by hand by artist Rob Heard, taking him 15,000 hours across a period of four years.

As we reach the centenary of the end of the First World War, I would encourage West Ham fans and East Londoners alike to see this powerful tribute of sacrifice and bravery

The project is especially poignant for West Ham United, who lost many players and former players during the First World War.

The 13th Service Battalion, better known as the West Ham Pals, were part of the Essex Regiment which fought at the Somme. 131 of that Battalion were killed at the Somme but have no known grave and will, therefore, be represented in the Shrouds installation.

The enormous scale of the Shrouds project demonstrates the true cost of the conflict, whilst also giving Hammers fans and members of the public an opportunity to remember those who never returned home.

West Ham United have supported the Shrouds of the Somme by printing almost 30,000 leaflets and 500 of their posters, many of which will be seen across London in the coming weeks.

David Gold, West Ham United Joint-Chairman said: “West Ham United is incredibly proud to partner with the Shrouds of the Somme project. The Club cherish their close relationship with the Armed Forces, dating back more than a century with the West Ham Pals, and we will always continue to show our dedication towards Remembrance, and those who died in the service of our country. As we reach the centenary of the end of the First World War, I would encourage West Ham fans and East Londoners alike to see this powerful tribute of sacrifice and bravery.”

Entry to the installation will be free to the public and will be open between 10am-7pm from its official launch on 8 November through to 18 November.

Any profits raised from donations will be given to the Armed Forces charity SSAFA and the Commonwealth War Graves Commission. If you would like to learn more about the project or find out how you can support it, you can do so via the Shrouds of the Somme website. 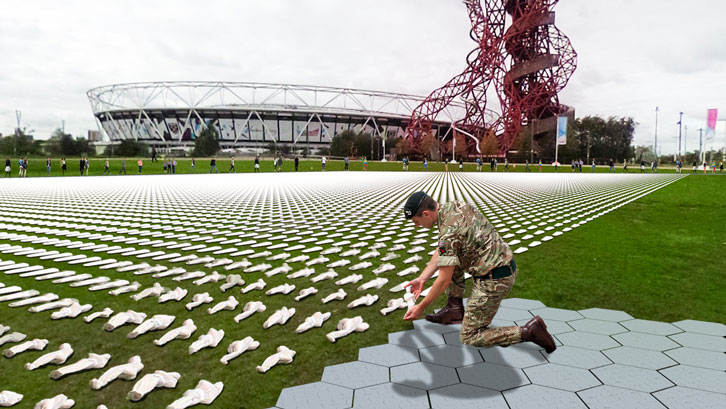