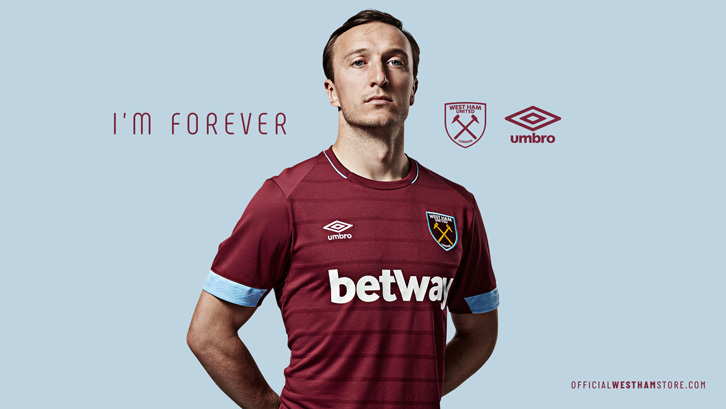 Mark Noble is relishing the prospect of playing in an attack-minded, possession-based West Ham United team under Manuel Pellegrini.

The Chilean has forged a reputation for putting together sides who play on the front foot, dominate the ball and score plenty of goals.

And the captain, who regularly leads West Ham’s own possession stats, cannot wait to start working with the man who led a record-breaking Manchester City to the Premier League title in 2014.

It’s an exciting appointment for everyone associated with the Club, as Manuel Pellegrini has a great record

“As captain, I am looking forward to welcoming the new manager to the Club when we return for pre-season training,” said the two-time Hammer of the Year, who launched the I’m Forever campaign for the Club’s new 2018/19 Umbro Home and Away kits on Friday.

“I’m sure I’ll have a chat with him before then and I’ll definitely give him the lowdown on West Ham United and what the Club means to its supporters, although I am sure he has already done his own homework and knows plenty about the Club and its traditions.

“He will be looking to the future, too, and I’m sure he will bring in his own staff and we will be linked to lots of potential new signings over the next few weeks!”

Pellegrini’s City scored a record 151 goals in his first season at the club and Noble believes his forward-thinking approach will go down well, both in the dressing room and in the stands.

“As players, it’s always more enjoyable when you have the ball than when you are chasing the other team around, so I was pleased when I heard him say he wants to excite the fans and play attacking football.

“West Ham fans love it when we take it to the opposition, particularly the big boys, and it sounds like we’re going to give it a right go.

“I’m already looking forward to getting back to Rush Green and starting work under him.”

The skipper, like so many of his fellow fans, is enthused by his arrival.

“It’s an exciting appointment for everyone associated with the Club, as Manuel Pellegrini has a great record, has managed some top clubs and is known for playing entertaining football,” the No16 observed.

“Perhaps just as importantly, seeing how we are in a results business in the Premier League, he wins football matches.

“To have a manager who has managed Real Madrid and Manchester City, won the Premier League title and led four different clubs in the Champions League shows that the Chairmen mean business. They said they wanted to bring in a top-level manager and that’s what they’ve done.”

*The new West Ham United 2018/19 Umbro Home and Away kits are available to pre-order now in Adult, Junior, Infant and Baby sizes, starting from £40.