Pellegrini: I am excited about the West Ham project 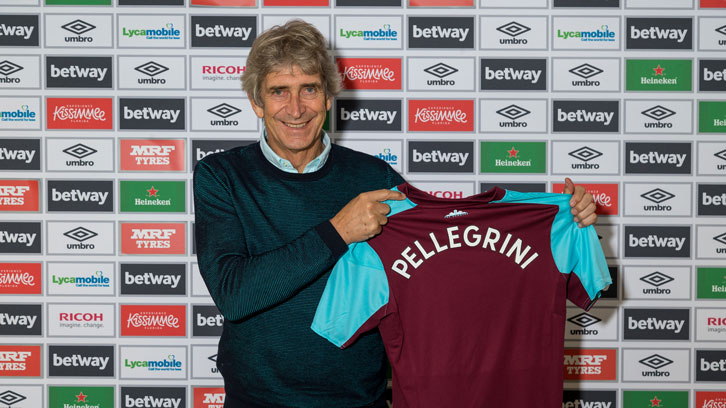 Manuel Pellegrini has outlined his philosophy to turn West Ham United into an exciting, winning team after being appointed Hammers manager.

The Chilean, who has become West Ham’s 17th permanent manager on a three-year contract, spoke of his vision for a team which will enthuse the Claret and Blue Army throughout his tenure.

Speaking for the first time following his appointment, Pellegrini said he felt wanted by the Hammers and outlined his ambitions for a successful future which he shares with Joint-Chairman David Sullivan and the Club’s supporters.

“I’m very happy because I return to a league that, for me, and I always say the same thing, is the best league in the world, and especially because I come here to West Ham because every time I spoke with the owner Mister Sullivan, I always had the feeling that he wants me," said the 64-year-old, whose track record throughout a 30-year managerial career is truly outstanding.

“I think that West Ham had a difficult season last season and I hope that next season we are going to play football that will delight the fans. I always play attacking football and we must try to reach important targets in the season.

“Every time you have a meeting you have feelings about whether it was a good meeting or a bad meeting and I had the meeting with him, just talking about football and talking about West Ham.  We agreed on a lot of things he wants for this Club in the way I think a football club must be managed, so we have a lot of common ideas.

“That’s why I just said that I always feel that he wants me as a manager, because we agreed on a lot of things he wants for this Club in the way I think a football must be managed, so we have a lot of common ideas. I hope now we can do it in the performance of the team.”

Pellegrini has lifted trophies on two different continents and led Manchester City to the Premier League title in his first season in English football in 2013/14, scoring a record 151 goals across all competitions in the process.

Prior to that, he enjoyed a storied playing career in his homeland and led Spanish sides Villarreal and Malaga to the UEFA Champions League knockout stages and managed La Liga giants Real Madrid.

After a successful two-year spell in Chinese football, Pellegrini has returned to Europe, where he enjoyed almost unrivalled success during 12 seasons managing some of Spain and England’s biggest clubs.

Now, the Santiago-born coach’s only focus is on improving West Ham’s standing in the Premier League – a competition he labelled the ‘best in the world’.

"I am excited about this project. My mentality is always to have a winning mentality and I will hope that I can repeat here what I did with all my clubs here in Europe, where I have always arrived in European competition.

“I know that this league is very good and it’s not easy to do it, but I think that working all together with the owners, the technical staff and the fans, we have an important power and can think about reaching important targets for the season.

“I think West Ham has a very good team. I know all of the players and I saw most of the games that they played last season, so I am sure that, with the players we have in this moment in the squad, and bringing maybe another four or five players in, we are going to have a strong team.”