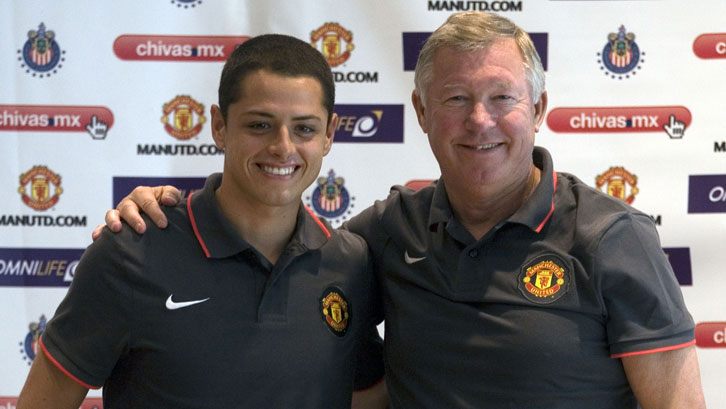 Chicharito has shared his affection for Sir Alex Ferguson as his former Manchester United manager continues to recover after suffering a brain haemorrhage.

Sir Alex, who brought the Mexican striker to Old Trafford from Guadalajara in 2010, was taken ill on Sunday and underwent emergency surgery. The Red Devils issued a statement on Wednesday evening confirming that the legendary Scot is out of intensive care and will continue to be treated as an inpatient.

Chicharito, who is preparing to welcome his old club to London Stadium on Thursday evening for West Ham United’s penultimate Premier League fixture, welcomed the news that his old boss’s health is improving.

Sir Alex gave me the chance to be here in Europe and to play with one of the best teams in the world. He’s like a father

“I was really shocked about the news,” he said. “I found out when [West Ham Vice-Chairman] Karren Brady, who had suffered a similar illness, shared her thoughts and prayers for Sir Alex and she let me know via WhatsApp.

“Thankfully, the news is that he is already getting better and improving, so all my thoughts and prayers are also with him and his family.

“I can’t imagine what they are going through right now, but hopefully Sir Alex can stay strong, keep improving and we can keep him in this world.”

“He’s been fundamental to my life and my career. He gave me the chance to be here in Europe and to play with one of the best teams in the world. He’s like a father.

“He treated me well and welcomed me in a very good way and I thought we spent three very good years together at Manchester United.”