Arnautovic at the double as Hammers power past Southampton 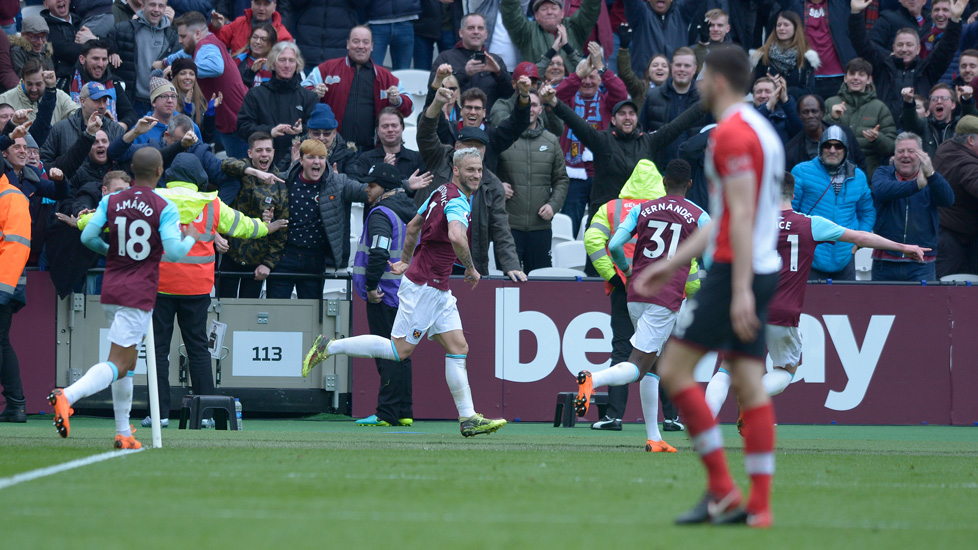 Two goals from Marko Arnautovic – including a stunning volley – and a first West Ham goal for Joao Mario earned the Hammers a deserved 3-0 win against Southampton.

All three of the Hammers’ finishes came in a blistering first half for the home side, with Mario powering home a terrific shot from the edge of the box into the roof of the net.

On 17 minutes Arnautovic got his first, calmly tucking away from close range after his initial header was well saved.

The attacker saved the best goal for the end of the first period, excellently volleying into the net after a magical cross from the returning Arthur Masuaku.

It seemed to be a difficult start for the Hammers with Michail Antonio needing to come off after just nine minutes. The visibly upset forward was replaced by the returning Edimilson Fernandes.

Having been the better team in the initial moments of the match, the Irons got their reward on 13 minutes. A powerful run from Cheikhou Kouyate got the Senegalese midfielder into space, who then squared the ball to Mario on the edge of the box.

The Portuguese star unleashed a rocket of a strike into the top of the net, giving Mario his first finish for the Club.

Just four minutes later, Arnautovic doubled West Ham’s advantage. Alex McCarthy made a sensational stop to deny the Austrian a certain goal from a headed effort, but Arnautovic made no mistake from the rebound, coolly tucking home.

The Irons controlled the first period and completed an incredible half four minutes into added time. Aaron Cresswell played Arthur Masuaku down the left-flank, with the returning left-sided player whipping in an excellent bending cross.

Arnautovic was on hand to coolly turn home an exquisite volley, putting the Irons firmly in control at half-time.

The visitors came out ready to battle back in the second period, and Angelo Ogbonna had to be brave as the Italian made a couple of crucial blocks to deny Charlie Austin and Shane Long.

Mario had West Ham’s first shot of the half, with the midfielder creating a chance out of nothing after the ball bounced inside the penalty area. A swivel from the loanee, and Mario fired a shot across the goal, which went close to sneaking in at the far post.

It was Arnautovic’s turn to have another go on goal just after, as the No.7 controlled a low pass from Mario and tried to curl in a low effort from distance. The shot was just wide of McCarthy’s post.

Arnautovic was given a worthy standing ovation from the excellent West Ham supporters at London Stadium when he was substituted on 80 minutes, with Jordan Hugill coming on for the No.7.

Cresswell was within a whisker of sealing a fine afternoon for the hosts when his injury time rocket kissed the crossbar, but three goals were more than enough to secure a massive three points.