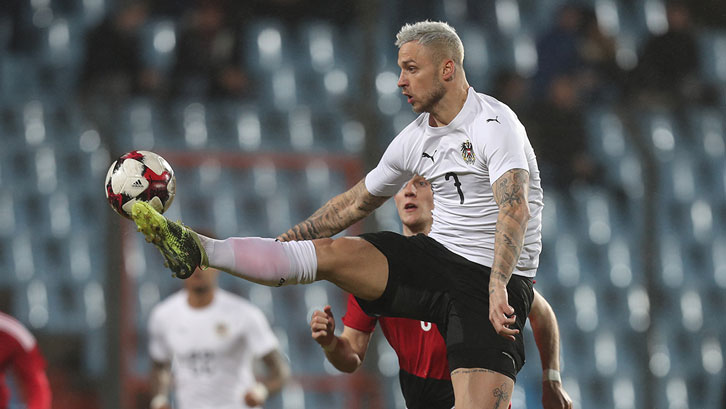 Marko Arnautovic continued his fine goal-scoring form with his third of the international break in Austria’s 4-0 friendly international win over Luxembourg.

The West Ham United forward, who had netted twice in his country’s victory over Slovenia on Friday, hit the target within four minutes at the Stade Josy Barthel in Luxembourg City on Tuesday evening. The 28-year-old played for 68 minutes before being replaced.

Arnautovic’s strike took him to 19 goals in 69 appearances in national team colours, and he has now scored ten in his last 15 games for club and country.

Young midfielders Josh Cullen and Declan Rice were both in the starting XI and completed the full 90 minutes as their Republic of Ireland U21 scored a late, late winner to see off Azerbaijan in a UEFA European Championship qualifier at Tallaght Stadium in Dublin.

Victory means they sit three points behind leaders Germany, but with a game in-hand, and could still secure automatic qualification for next summer’s final tournament in Italy.

The West Ham goalkeeper was making his fourth appearance at that level, and followed up an unbeaten performance in the 1-0 friendly win over Poland on Thursday with another shutout.

Sticking with the stoppers, 15-year-old Daniel Jinadu also blanked the opposition as England U16s kicked-off their quest to win the Montaigu Tournament in France with a 2-0 win over Russia.

England face Cameroon on Thursday and Brazil on Saturday in their other group-stage fixtures. Either Jinadu or West Ham squad-mate Serine Sanneh will keep goal for the U16s in those fixtures.

Elsewhere, Joe Hart and Angelo Ogbonna were both handed watching briefs as England drew 1-1 with Italy in a friendly at Wembley, while Sead Haksabanovic was an unused substitute in Montenegro’s 2-2 draw with Turkey.

*Click here to find out how West Ham's young professionals fared in their international matches on Tuesday afternoon.