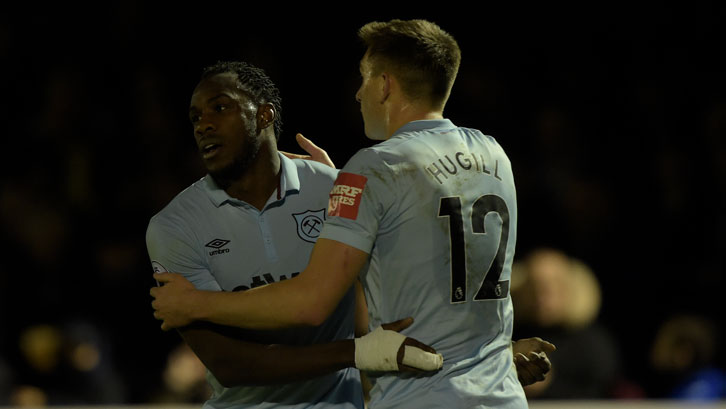 The Hammers edged a competitive friendly organised in aid of the National League side, who are in dire financial straits after their main benefactor withdrew future funding in February.

Antonio continued his recent hot streak with a goal in each half in front of a 4,515-strong crowd at Chigwell Construction Stadium. The powerful Mason Bloomfield got Dagenham back in it on the hour-mark before Hugill marked his first start with the clincher three minutes from the end.

An entertaining opening 90 minutes could easily have produced more than four goals, with both sets of players giving their all in a match that far from resembled a friendly.

West Ham, unsurprisingly, controlled possession for the majority of the opening half, but the identity of their standout performer would certainly have been a shock to the thousands of Hammers fans inside the ground – Alfie Lewis.

The teenager was hugely impressive alongside Mark Noble in central midfield, making himself available to receive the ball, playing with his head up and passing and carrying it forward with confidence.

Alongside him, Arthur Masuaku was his usual direct and athletic self down the left wing, and it was the winger who went closest to opening the deadlock in the opening half-hour, seeing one cross hit the crossbar and a long-range shot tipped wide by goalkeeper Mark Cousins. Hugill led the line with physicality and fired one effort over the top, before Antonio did likewise.

Dagenham & Redbridge played with purpose themselves and threatened on more than one occasion. First, Adrian had to be alert to block a low shot from Luke Howell, then giant centre forward Mason Bloomfield powered close-range a header a yard too high after a fine run and cross from Jake Howells.

The opening goal finally arrived on 42 minutes, albeit in slightly fortunate circumstances. Hugill was denied by a last-ditch challenge from Ben Nunn, only for left-back Luke Pennell’s clearance to hit Nathan Holland ricochet into the path of Antonio, who coolly converted.

And it was the same player who doubled West Ham’s lead eleven minutes into the second half, running onto Josh Pask’s through ball before holding off former Hammer Bondz N’Gala and sliding the ball under Cousins and into the back of the net.

Three minutes later, Dagenham were back in it when, after the visitors had miraculously blocked at least three goal-bound efforts in the space of a few seconds, Bloomfield smashed home Dan Sparkes’ low cross.

Sparkes himself came closest to equalising for the fifth-tier side, but his low shot was well held by Adrian before the Spaniard showed superb reactions to keep out efforts from Robinson and Sparkes in the space of a few seconds.

And, having held off Dagenham's charge, Hugill put the game beyond doubt three minutes from full-time, converting substitute Anthony Scully's right-wing cross to end a special night in east London with a welcome goal.