Adrian on the spot again to secure Betway Cup for Hammers 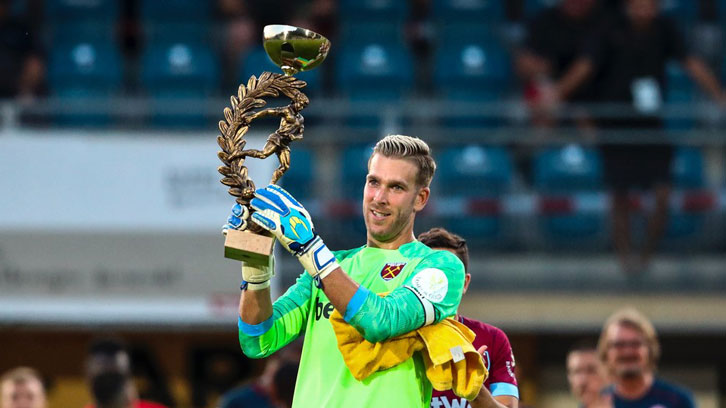 The Hammers looked on course to win the tie in normal time when substitute Toni Martinez headed his side ahead midway through the second half.

However, a deflected equaliser from the German Bundesliga side’s Robin Quaison eight minutes from the end sent the match straight to penalties.

There, Adrian saved one spot-kick and scored another before Gaetan Bussman skied his effort high and wide of the Spaniard’s goal to make it fourth time lucky for the men in Claret and Blue, who had previously been beaten by Werder Bremen (twice) and Juventus in the pre-season competition sponsored by the club’s principal partner.

Earlier, the game had kicked-off in record-high temperatures of around 90F at the Silberstadt Arena in Schwaz, where fans of both clubs congregated for a competitive match played in the right spirit from start to finish.

It was Marko Arnautovic – labelled the ‘local hero’ more than once by the enthusiastic stadium announcer – who had the game’s first chance, latching onto Robert Snodgrass’s through ball before seeing his shot deflected wide.

Mainz then went close twice before West Ham took control of the opening period. First, midfielder Alexandru Maxim stung Adrian’s palms with a rising shot that was sneaking inside the Spaniard’s near post, then Ridle Baku ‘goal’ disallowed for offside.

After that, it was West Ham whose sharper movement and more accurate passing saw them dominate the ball and territory, but they tested Mainz goalkeeper Robin Zentner just once, when Michail Antonio’s shot was turned over just before half-time.

The second half followed much the same pattern as the final 30 minutes of the first, with Manuel Pellegrini’s team controlling proceedings without regularly worrying Zentner.

That changed on 21 minutes remaining when Snodgrass stole a yard down the right-hand side and clipped a cross to the far post for Martinez, who calmly planted his header inside the far post.

Then, with eleven minutes to go, the Germans levelled in slightly fortunate circumstances as Robin Quaison’s shot flicked off Arthur Masuaku and into the top corner, leaving Adrian no chance.

West Ham recovered their composure and created a series of chances in the closing stages, the most presentable of which saw Snodgrass again lift a cross into the path of Martinez, only for the striker to volley wide.

Then, with seconds remaining, Quaison looked odds-on to win it for Mainz before an inch-perfect tackle from Fabian Balbuena hooked the ball away.

And so to penalties and things looked bleak for the Londoners when Masuaku hit the base of the post with their opening effort.

However, Adrian showed why he has such a reputation for saving from the spot by keeping out Pablo de Blassis’s shot.

Adrian, who had taken the armband when Mark Noble was substituted, then fittingly lifted the trophy presented to him by Betway managing director Alan Alger.