Felipe Anderson and Arnautovic on target in Ipswich win 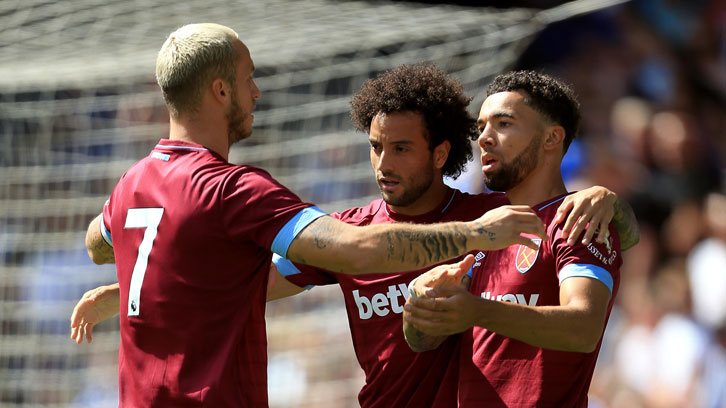 Felipe Anderson scored his first goal in Claret and Blue and Marko Arnautovic was on target again as West Ham United won 2-1 at Ipswich Town on Saturday.

The Hammers were arguably not at their fluent best in Suffolk, but two clinical finishes were the difference between the Premier League side and their Championship opponents.

Having dominated Aston Villa in midweek, West Ham were given a sterner test by Paul Hurst’s team, who could have snatched a share of the spoils on another day.

Roared on by an estimated 5,000 supporters at Portman Road, Manuel Pellegrini’s side were ahead within three minutes through the unlikely source of Felipe Anderson’s forehead. Picking up where they left off at Aston Villa in midweek, just 145 seconds had elapsed when three of West Ham’s summer signings combined to give their new team the lead.

Andriy Yarmolenko’s threaded through ball sent Ryan Fredericks clear into space behind Ipswich left-back Jonas Knudsen and, when he crossed at head height, the Brazil winger had stolen a yard on former Hammer Jordan Spence and nodded inside the far post.

Andre Dozzell – the son of former Tractor Boy Jason – was the creator, splitting the visiting defence with a fine ball for striker Ellis Harrison to poke first-time past debutant Lukasz Fabianski in the West Ham goal.

Having got themselves back on level terms, Paul Hurst’s side enjoyed their best spell of the match, with Gwion Edwards testing the Poland goalkeeper, Harrison hitting the post with a header and Knudsen screwing a shot high and wide.

While they may have been under pressure, West Ham never lost their poise, however, and could have led themselves at the break.

First, Fabian Balbuena’s glancing header was hacked away from inside the six-yard box, then Yarmolenko saw his shot deflected a yard wide after latching onto a superbly weighted pass from Wilshere.

The England midfielder and returning Cheikhou Kouyate – back from his post-World Cup break – were withdrawn at the break, with Mark Noble and Robert Snodgrass the men to replace them.

However, it was Ipswich who came out of the traps faster in the second half, with the lively Harrison leading the charge.

First, Fredericks had to be alert to divert Tristan Nydam’s effort around the post. Then, the same player saw Harrison’s cross flash in front of him and across the face of Fabianski’s goal.

Having weathered that storm, the Hammers then went back into the ascendance.

Robert Snodgrass tested Bialkowski with a powerful low drive before Pellegrini’s side grabbed the victory with a goal that owed almost everything to Arnautovic.

The Austrian showed power and pace to race away from the Ipswich centre-halves and latch onto substitute Sead Haksabanovic’s through pass and poke nonchalantly past Bartosz Bialkowski and into the corner to score his fifth goal in five pre-season appearances.

With both managers making a succession of substitutions, the game lost its flow, but Fabianski was called upon to make a smart save from Dozzell that ensured he would end his debut on the winning side.