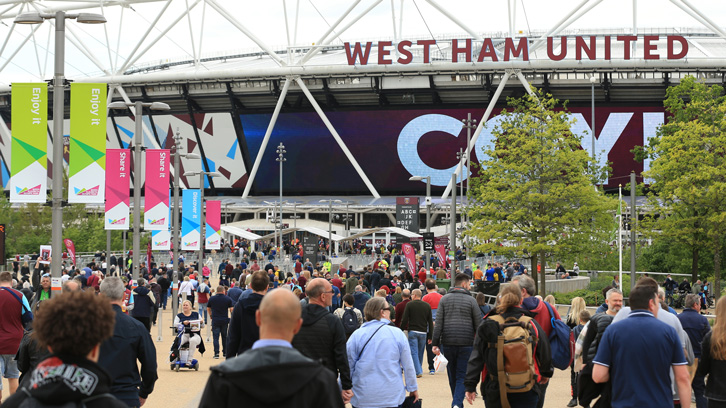 West Ham United are delighted to announce that all 52,000 Season Tickets available for the forthcoming Premier League campaign have once again sold out!

A record number of Season Ticket renewals for Manuel Pellegrini’s first campaign at the helm was announced last month, with 92% of supporters signing up to back the new-look Hammers in 2018/19, which will include at least seven new faces – Club record signing Felipe Anderson, Jack Wilshere, Andriy Yarmolenko, Issa Diop, Ryan Fredericks, Lukasz Fabianski and Fabian Balbuena.

The remaining Season Tickets were snapped up by supporters on the Waiting List, meaning another capacity crowd is expected at London Stadium next season as the Hammers retain their impressive status as one of the highest attended Clubs throughout all of Europe’s top leagues.

The commitment of West Ham’s most loyal fans means the Club has now sold its full allocation of Season Tickets, the second highest amount in the Premier League.

Joint-Chairman David Sullivan paid tribute to the devotion shown by the Claret and Blue Army.

“Yet again, our magnificent supporters have shown they are the best in the country,” said Mr Sullivan. “To have completely sold out available Season Tickets weeks before the new season kicks-off is testament to their unrivalled backing of the Club.

“For the third season in a row, we will have 52,000 Season Ticket Holders backing us at every home game.

“There is a huge amount of excitement surrounding the Club at present following the appointment of Manuel Pellegrini as manager and this has been reflected in the demand for Season Tickets."

Manager Manuel Pellegrini was delighted but far from surprised to hear the news ahead of his first season in east London.

“I already knew West Ham was a huge Club with an incredible fan base and supporters all over the world” said Pellegrini. “I am told we have more Season Ticket Holders than any other club in London and that is something we can all be proud of.

“I know very well that the West Ham fans are always behind their team. I want to thank all those who have shown their faith in the team, my staff and I to entertain them with the kind of football and results that their incredible support deserves.”

Due to the record number of renewals, some supporters on the Waiting List have not secured a Season Ticket for 2018/19, but they remain in pole position to secure a seat at a future date. To join the Waiting List click here.

For non-Season Ticket Holders, Claret Membership is the next best way to watch West Ham’s home Premier League matches at London Stadium.
Membership is priced at just £40 for Adults and £25 for U16s, and entitles you to priority on home tickets with a £5 discount on Premier League fixtures, a £5 discount on official away coach travel, access to exclusive events, retail offers throughout the season and a limited edition gift pack. Click here for more information, or to become a Claret Member today, please click here.

Join the Waiting List now - The only way to secure a Season Ticket
Last Match
Sunday 23 May 16:00
London Stadium