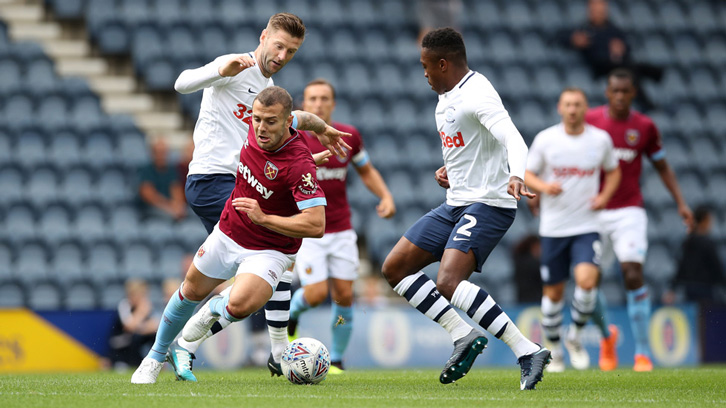 If Jack Wilshere’s West Ham United debut is a sign of things to come, Hammers supporters have another reason to look forward to the 2018/19 Premier League season.

The England midfielder showed more than one or two glimpses in Saturday’s 2-2 pre-season draw at Preston North End of just why he has earned 34 international caps and played 27 times in the UEFA Champions League.

Playing in an attacking midfield role behind centre forward Marko Arnautovic in a 4-2-3-1 formation, Wilshere provided the link between his deeper lying midfield and attacking colleagues, popping up all over the pitch and combining effectively with his new teammates.

The No19’s first touches in Claret and Blue came after 50 seconds when he controlled a long ball forward before combining with Mark Noble to win a throw-in.

Showing the balance, technique and ability to find space that made him a star at Arsenal, his second involvement, in the sixth minute, led to West Ham’s opening goal.

Wilshere exchanged passes neatly with Pedro Obiang and Robert Snodgrass before being fouled by Preston right-back Darnell Fisher inside the centre circle. The Lilywhites switched off, allowing Mark Noble to step forward and clip the free-kick over the home defence and Arnautovic to control and calmly slot past goalkeeper Chris Maxwell.

Two minutes later, Wilshere had his first chance to run at the Preston back line as he drove into the inside left channel, drawing defenders before playing a couple of one-twos, this time with Robert Snodgrass and Arnautovic, and keeping possession for his side in the final third.

Indeed, in the opening 25 minutes, the 26-year-old was perfect in possession, completing 100 per cent of his ten attempted passes, all of them inside the Preston half.

And he made it eleven out of eleven by spinning away and skipping two challenges before starting another attack down the left flank. Even when Wilshere did finally misplace his first and only pass in the 26th minute, it appeared that Preston’s Tom Barkhuizen handled the ball in cutting it out.

He recovered from the shock of losing possession by playing his part in arguably West Ham’s best move of the match, collecting the ball inside the penalty area before laying it off. Moments later, the Hammers had worked it wide right for Andriy Yarmolenko to curl a powerful shot wide.

Three more accurate passes made for a near-perfect opening half-hour before another incisive piece of play which led to a Noble shot being blocked.

Wilshere’s only sight of goal came nine minutes before the break, when Noble’s cross glanced off Fisher and hit the Hammer before the full-back recovered to poke the ball behind for a corner.

When the half-time whistle was blown, 20 of Wilshere’s 21 pass attempts had reached a teammate, giving the debutant a very impressive 95.2% completion rate, he had won the free-kick that led to the Hammers’ opening goal and lost possession just once.

Should he replicate that sort of form in the Premier League, West Ham will undoubtedly benefit.