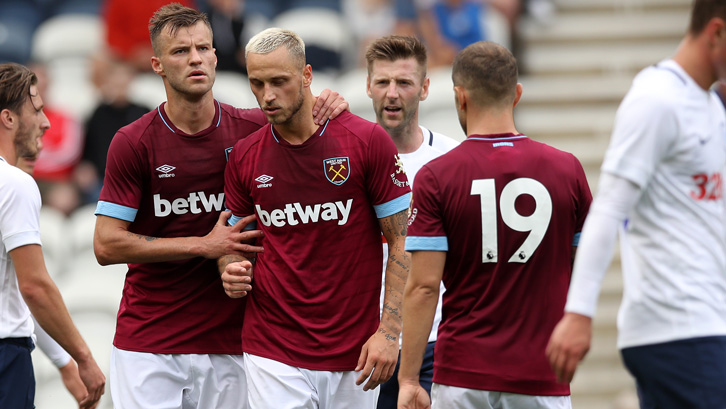 Marko Arnautovic scored twice and Jack Wilshere made an impressive debut as West Ham United were held to a 2-2 draw at Championship side Preston North End.

Just as he had been at Wycombe Wanderers the previous weekend, Arnautovic was on target, netting two well-taken first half goals at Deepdale.

Alongside Arnautovic, debutant Wilshere also caught the eye, winning the free-kick which led to the Austrian’s seventh-minute opener and driving his team forward at every opportunity.

Ukraine star Andriy Yarmolenko also followed up his own impressive debut with another eye-catching display in Lancashire, capped by an assist for Arnautovic’s second goal on the stroke of half-time.

In between the No7’s two strikes, Preston had levelled through captain Tom Clarke’s powerful header, and the hosts grabbed a share of the spoils through substitute Billy Bodin’s smart control and finish with 15 minutes remaining.

The opening goal arrived inside seven minutes and was created by Wilshere. The England international was fouled inside the Preston half, enabling Mark Noble to clip a quick free-kick over the home defence, who desperately appealed for offside, for Arnautovic. The striker controlled, steadied himself and calmly shot under goalkeeper Chris Maxwell.

Having taken the lead, the Hammers then proceeded to play some fine football, at times, with Yarmolenko regularly combining with Wilshere, Arnautovic and marauding right-back Ryan Fredericks.

On the other flank, Arthur Masuaku and Robert Snodgrass combined to set up Arnautovic for another shooting chance that the Austrian screwed over Maxwell’s crossbar.

Yarmolenko was next to threaten, cutting inside on his left foot and firing powerfully past the far upright.

Preston played their part too, though, and Alex Neil’s side were level five minutes before half-time. Snodgrass was penalised for a high boot and when Paul Gallagher swung in a from the right flank, Clarke got in between two defenders to head past Adrian.

West Ham were ahead before half-time, though, and in outstanding style. Yarmolenko collected in the inside-right position and played the ball inside to Arnautovic, who held off his man before smacking an unstoppable low left-foot shot inside Maxwell’s far post.

Wilshere was replaced at the break, as planned, with Sead Haksabanovic on in his place, and the young Montenegrin was immediately in the action, shooting across the face of the Preston goal.

The Lilywhites then enjoyed their best spell of the game and West Ham had Adrian to thank for keeping his team in front.

A third chance in the space of two minutes then fell to Louis Moult, but the striker somehow contrived to shoot over the crossbar from eight yards.

Having escaped that left-off, West Ham then won a penalty when Josh Earl brought down Fredericks, only for Maxwell to guess correctly and save Noble’s spot-kick.

And Neil’s men took advantage of the captain’s rare profligacy to equalise for a second time on 76 minutes.

Left-back Alex Hughes lifted a long, diagonal ball over to fellow substitute Bodin, who controlled the ball before getting past Rice and shooting between Adrian and the near post to score.

There was still time for Toni Martinez to test Maxwell with a well-placed header from Fredericks’ cross and Bodin to poke a yard wide at the other end, but an entertaining game ended level.

West Ham return to action on Wednesday evening, when they head to Aston Villa to face Steve Bruce’s Championship Play-Off runners-up, before rounding out a busy week with a trip up the A12 to Ipswich Town on Saturday afternoon.