Anderson joins Manuel Pellegrini’s side on a four-year contract, having completed five hugely-successful seasons in Italy with Lazio.

The Brazilian, who has been capped at senior level by his country, scored eight goals and assisted ten more in his 32 appearances for the Rome club last term.

Anderson’s undoubted creative ability was a key factor in the Club moving for the 25-year-old – the Hammers’ seventh signing of the summer so far after the arrivals of Ryan Fredericks, Lukasz Fabianski, Issa Diop, Jack Wilshere, Andriy Yarmolenko and Fabian Balbuena.

The man, himself, cannot wait to test himself in the Premier League.

West Ham is a club with a lot of tradition, lots of great players have played here, like Bobby Moore, Carlos Tevez and Di Canio. I'm really happy to be here. It's a dream come true.

"I feel really happy and fulfilled to join West Ham United," Anderson told whufc.com. "West Ham is a club with a lot of tradition, lots of great players have played here, like Bobby Moore, Carlos Tevez and Di Canio.

"They were great players and idols here, and I’m aiming big, who knows, maybe I could hit their heights and be a legend here too. I'm really happy to be here. It's a dream come true.

"I want to thank the owner, David Sullivan, because he made a big effort to bring me here. I know how difficult it was, so I have to thank him a lot, and I hope I can repay his faith in me on the pitch with goals and winning games."

Director of Football Mario Husillos is delighted to have welcomed the winger to London Stadium and believes Anderson's signing shows the Club's intent for the coming campaign. 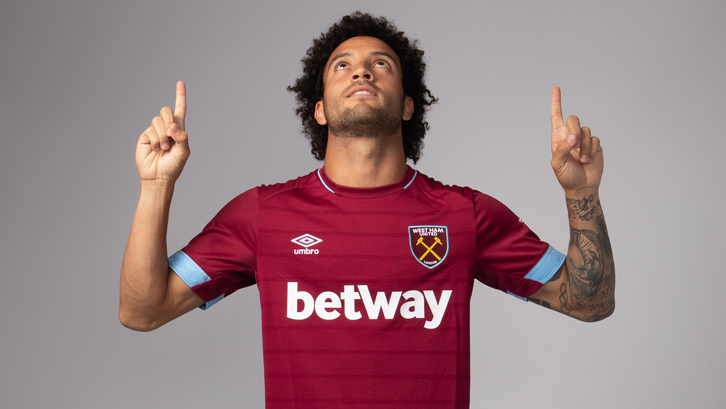 "We are very happy and pleased to welcome Felipe to West Ham United," Husillos said.

“We believe that we have signed one of the most exciting talents in European football. Felipe has shown a fantastic level of performance at Lazio in recent seasons and we believe that he will now bring that quality to the Premier League. He is also a player very suited to the style of Manuel Pellegrini.

“For West Ham United this is a very big statement, a club record, so we must thank the owners for their support and work in making this transfer possible.

“It is a negotiation that has taken some time but it is a very good sign that Felipe was determined to become a West Ham player, and we feel very confident that he will become a big success at London Stadium.”

Joint-Chairman David Sullivan said: “Felipe was a main target of the manager so we are delighted we’ve been able to bring him to the Club.

“We’re very pleased with the business we’ve done so far and I hope the supporters are just as excited as we are about the squad we are building here at West Ham.

“The deal sees us significantly break our transfer record and we feel it’s a real statement of intent.”

Born in Santa Maria, Brazil, Anderson made his way in football with Sao Paolo side Santos, making his senior debut in October 2010, when he was just 17.

The following year he helped Santos win the Copa Libertadores – South America’s equivalent of the Champions League – before heading to Europe to link up with Lazio in the summer of 2013.

He wasted little time in making his mark in Italy, scoring eleven goals in the 2014/15 campaign and playing a major role as Lazio reached the final of that season’s Coppa Italia.

In total he scored 34 goals in 177 Lazio appearances, lifting the 2017 Supercoppa Italiana along the way, and last term led the league in terms of dribbles, with an average of 5.4 per game.

He has also enjoyed success on the international stage, winning an Olympic Gold Medal at the 2016 Rio de Janeiro Games, and making his senior Selecao debut in a friendly against Mexico in 2015.

Everyone at West Ham United would like to welcome Felipe and his family to the Club and wish him every success in his career with the Hammers.