The exciting, prolific and versatile forward has joined the Hammers from Borussia Dortmund on a four-year contract for an undisclosed fee.

The talented Yarmolenko has enjoyed a hugely successful career with Dynamo Kyiv and the Ukrainian national team, scoring more than 175 goals and registering well over 100 assists, being voted Ukrainian Footballer of the Year on no fewer than four occasions.

He will now test himself in the Premier League for the first time.

“Of course, I am very happy to sign for West Ham United,” said the 28-year-old. "West Ham is a big club with good fans and I am happy to come to play in the Premier League.

West Ham is a big club with good fans and I am happy to come to play in the Premier League.

"The Premier League is the best league in the world and I know that an interesting project is being built here at West Ham. The team wants to achieve high things and I am excited for this challenge."

“We are very happy to welcome Andriy. When we had the opportunity to sign him, we did not hesitate, because he really is the kind of player that we were looking for,” said Husillos. 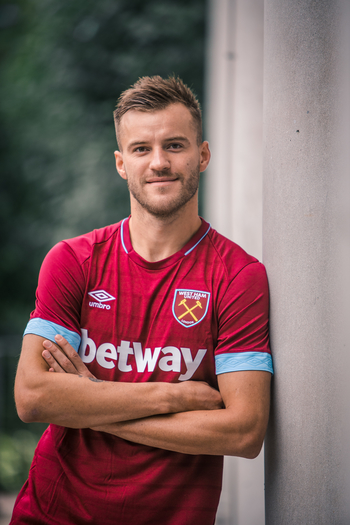 “He is a left-footed player but can play on the right and is very quick, very good one-on-one against a defender. He gives the team a lot of attacking options and scores goals, is fast on the counter-attack and provides aerial threat with his height.

“He also has very good experience, of playing for big teams and fighting for titles. At Dortmund, he had some good matches but perhaps didn’t quite show his very best. However, I think Manuel Pellegrini is the perfect coach for Andriy and his style of play.

“I believe he is joining us in the perfect moment. He is 28, the prime age for football, and we have great expectation about what he can achieve with West Ham United."

Born to Ukrainian parents in Leningrad – now Saint Petersburg – in what was then the Soviet Union, Yarmolenko and his family moved home to the city of Chernihiv while he was still a child.

There, he played for local club Desna Chernihiv before signing for Dynamo Kyiv at the age of 17 in December 2006, starting a ten-year association with the Ukrainian giants.

Praised for his attacking prowess and compared to compatriot Andriy Shevchenko, Yarmolenko impressed for Dynamo’s second team before being promoted to the senior side in May 2008, when he was still just 18.

Playing regularly as either a centre forward or a winger, the teenager became a regular in the 2009/10 season and was an automatic starter for Dynamo side for the next eight seasons, winning three Ukrainian Premier League titles and two Ukrainian Cups.

Yarmolenko hit double figures in each of his final seven years with Dynamo, hitting 21 in 2013/14 and 19 in each of his last three seasons in the Ukrainian capital.

Unsurprisingly, the 6’3 attacker has also featured regularly for the national side, scoring a stunning 35 goals in 77 caps since netting twice his debut against Andorra in September 2009.

Only Shevchenko has scored more goals for Ukraine than the Hammers new boy.

Yarmolenko passed his medical with the Hammers in Switzerland this week and will rejoin the squad on Thursday after formalities are complete.

West Ham United would like to welcome Andriy and his family to the Club and wish him all the best for his career in Claret and Blue.