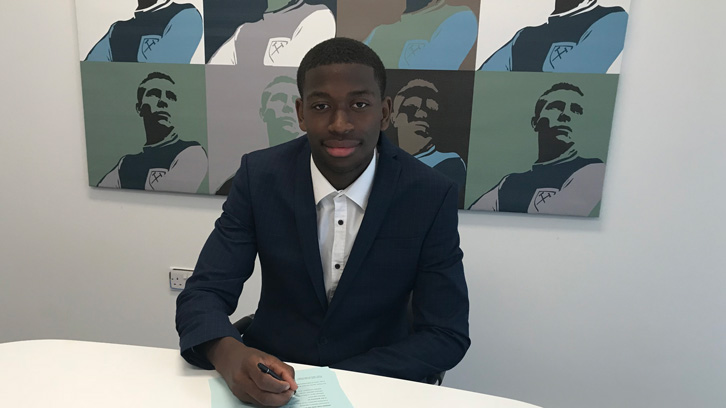 West Ham United are delighted to confirm that highly-rated young central defender Ajibola Alese has signed his first professional contract with the Club.

The 17-year-old has put pen to paper on a three-year deal at London Stadium following a memorable last 12 months, in which he made his Under-23 debut for the Hammers and represented England at the UEFA Under-17 European Championship finals on home soil.

Alese said: “It’s a very proud day for myself and my family. I have been at West Ham United since I was seven years-old and to now become a professional here is a great honour.

“This caps off a great year for me, having broken into the Under-23 team last season and progressed with England, and now I just want to keep working hard and learning more.

“I’m now really excited and looking forward to next season. Hopefully I can establish myself in the Under-23 team and push on from there.”

Academy Director Terry Westley added: “We are very fortunate to have one of the best defenders in the country for his age group – proved by the fact that Aji has played for and captained England at youth level.

“He played five times for our Under-23s last season as a first-year scholar and, if it wasn’t for injury, I think he would have played a lot more at that level. He has a really good pedigree, having progressed through our system from a very young age.

“He also follows a long line of young centre-backs who have progressed in recent seasons – Reece Burke, Reece Oxford, Declan Rice, Josh Pask, who are all away with the first team in Switzerland now. Their job now is to prove to the new manager that they deserve to establish themselves in his squad, and Aji’s job below them is to begin closing the gap.

I’m now really excited and looking forward to next season. Hopefully I can establish myself in the Under-23 team and push on from there

“His first challenge is to make the step from Under-18 to regular Under-23 football, and then get in front of the manager and his staff to show that he is capable of playing at an even higher level. He is already training with the Under-23s after returning for pre-season, and must now work as hard as possible to keep progressing in the right direction.”

Alese, who only turned 17 in January, has made magnificent progress since joining the Club full-time as a first-year Academy scholar last summer. In August, he made an impressive debut for the Under-23s in their opening game of the season against Everton, before injury ruled him out for a lengthy period of time.

However, he returned to make four more appearances for Westley’s team last season, including excellent displays against Manchester United and Leicester City in January.

In May, he was called into the England Under-17 squad for the European Championship finals and played a key role as Steve Cooper’s Young Lions reached the semi-final, where they were cruelly beaten in a penalty shoot-out following a 0-0 draw.

Previously, Alese captained his country at Under-16 level and appeared for West Ham United’s Under-18 team while still a schoolboy, scoring in a 3-3 draw against Arsenal in the final game of the 2016/17 campaign.

Everyone at West Ham United would like to congratulate Ajibola on signing professional terms and wish him a successful future with the Club.

Meanwhile, the Hammers can confirm that 18-year-old defender Ben Wells has signed for Championship side Queens Park Rangers. Everyone at West Ham United would like to wish Ben well in his future career.