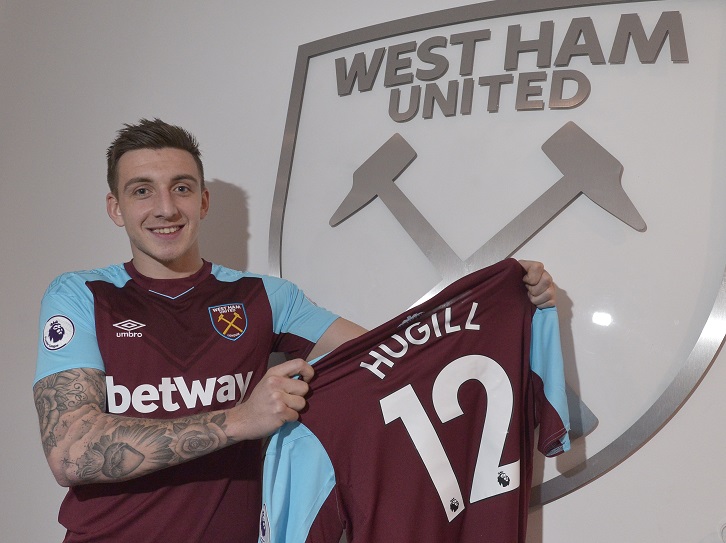 The 25-year-old arrives in east London from Championship club Preston North End after putting pen to paper on a four-and-a-year contract for an undisclosed fee.

The Middlesbrough-born striker, who is enjoying the most prolific season of his career, is delighted to have joined the Hammers and cannot wait to test himself in the Premier League.

“I'm absolutely delighted!” said Hugill, who will wear the No12 shirt. "It's been a long day, but to get this over the line is amazing for me and it's now a new challenge for me and hopefully I can bring what I did at Preston here and show what I can do. We got on the train at lunchtime and I couldn't tell you what happened, it's all been a blur!

"It's amazing to know I'm a Premier League footballer, to know where I've come from in the last five years to where I am now in the Premier League is amazing. I'm still pinching myself to see if it's all real, but hopefully I can bring my qualities from Preston here to West Ham. Without a doubt it's a huge opportunity and I'm looking forward to it.

"Wherever I have been in life, not just in football, but in whatever I do, I give everything. I'm going to give absolutely everything for this Club and for my teammates. It's a new challenge for me, playing in the Premier League, but they are going to get nothing less than 100 per cent.

"I know a lot about West Ham and its history. Upton Park spoke for itself and now the big move here which was a brilliant thing. The one thing that has struck me about watching West Ham over the years is the fan base that we've got. It's amazing how good the fans are here, so I'm looking forward to walking out at London Stadium and hearing the old Bubbles!"

A hard-working, physical centre forward who is dominant in the air and with his back to goal, Hugill is a graduate of the Glenn Hoddle Academy, where he spent a year honing his skills under the expert eye of the former England manager.

On returning to England, he played non-league football in his native North East with Whitby Town and Marske United before before moving into the professional game with Port Vale at the age of 21 in 2013.

After a brief but prolific loan spell with Conference Premier club Gateshead, Hugill returned to Vale Park and ended his single season in the Potteries by being voted Young Player of the Year.

Hugill moved to Preston in June 2014 before further honing his skills during loan spells with League Two sides Tranmere Rovers and Hartlepool United, scoring the goal which kept the latter in the Football League. He returned to Lancashire in May 2015 and was part of the North End squad which won promotion to the Championship by defeating Swindon Town at Wembley in the League One Play-Off final.

The 2015/16 season saw Hugill establish himself in the Preston starting XI and his form over the last two-and-a-half seasons has attracted attention from Premier League and Championship clubs alike.

Last term, he netted a career-high 13 times, finishing as the club’s leading scorer as the Deepdale club finished the season in eleventh place. And he has maintained that form this season, netting ten times in 29 appearances in all competitions.

We welcome Jordan to east London and wish him the very best in a West Ham United shirt.