Moyes: We obviously made some big errors

David Moyes was disappointed, both collectively and individually, with West Ham United’s performance in their 2-0 Emirates FA Cup fourth-round defeat at Wigan Athletic.

The injury-depleted Hammers were not only beaten comprehensively by the EFL League One leaders, but also lost Arthur Masuaku to an ‘unacceptable’ red card and Pedro Obiang to an unfortunate knee ligament injury.

A goal in each half from Will Grigg, the second a controversial penalty given for handball against Reece Burke, compounded Moyes’ misery at the DW Stadium.

We are disappointed to be out of the Cup, but we didn’t play well enough

“We are disappointed to be out of the Cup, but we didn’t play well enough and Wigan thoroughly deserved their victory,” he began. “It was definitely down to our performance and we obviously made some big errors. Certainly, the error for the decision to send one of my players off was despicable.

“He (Masuaku) will deserve everything he gets and he will get something off us as well. It’s unacceptable, totally unacceptable. Just as we were looking to get back in the game, we were only one-nil down, we weren’t playing that well but we were giving ourselves a chance to get back in it, but that changed it.

“I’ve got no complaints about that at all. All I would say is that there is no way the referee saw it, but ultimately they got to the right decision. I can have no qualms about it.”

Moyes believes Masuaku’s act – video replays showed him spitting in the direction of Nick Powell – was out of character.

“I’ve not seen him from him. We’ve played him since I’ve got here and tried to give him a chance. He wasn’t really in the team. We like him. He’s a good boy around the Club and I like him, so I have to say it’s out of character, but it doesn’t matter what character he is. I asked him ‘Did you spit?’ and he said ‘Yes’.” 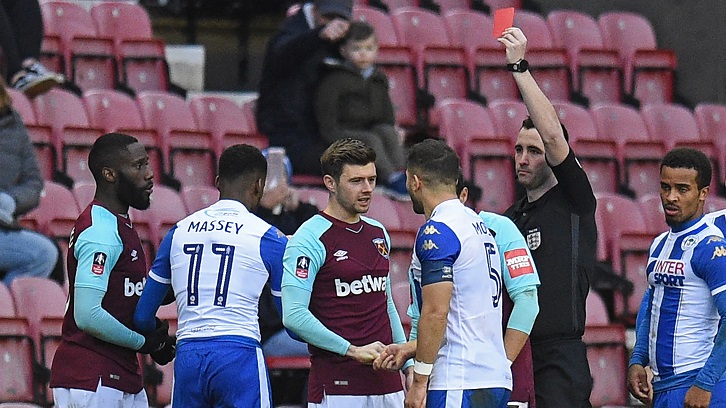 While Moyes accepted Chris Kavanagh’s decision to send off Masuaku, he was less impressed with the referee’s award of a penalty just past the hour-mark.

“That’s a poor decision. It’s really changed the game. Undoubtedly Grigg’s tried to come across and chip the ball back inside, but I don’t know where Reece can put his arms or his elbows, or how that can be seen as a penalty kick.

“We’re in a position where I don’t think referees and the linesmen know what a penalty kick is any more.”

To add injury to insult, Moyes also lost Obiang to a serious-looking knee injury that saw him carried from the pitch on a stretcher ten minutes before half-time.

With eleven other senior players not making the trip to Wigan, the manager and his staff now face a race to get a number of them in position to face Crystal Palace in the Premier League at London Stadium on Tuesday evening.

“Pedro looks as if he’s got a medial knee ligament and this is the thing, as you get criticism for not using your best players and we’ve picked every senior player available apart from James Collins and we’ve ended up picking up injuries.

“So, I think sometimes the criticism of the manager for doing it right [is unjust] as you’ve got to see the other side of it as well.

“We’ll need to get over this quick and get on with it, but that’s the job. Premier League games come around quickly and we’ll get some players back fit, but obviously we’ve lost a couple more today.”