Moyes: We need Joao Mario to hit the ground running 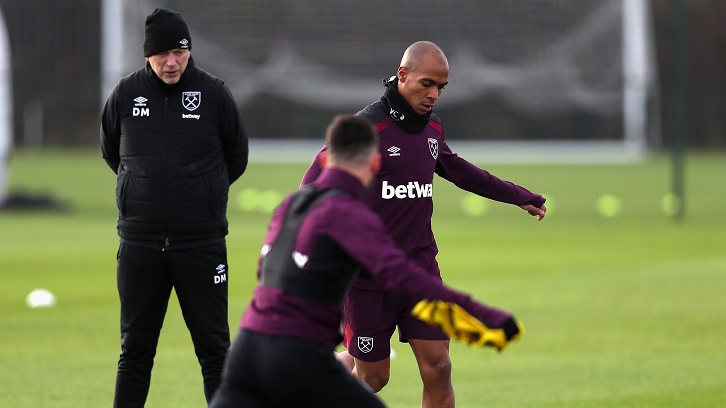 The Portugal playmaker became the Scot’s first Hammers signing when he completed a loan move from Italian club Inter Milan on Friday morning.

With Manuel Lanzini nursing a hamstring injury, Moyes says it is important that his new No18 adapts to life in English football as quickly as possible, starting in Saturday’s Emirates FA Cup fourth-round tie at Wigan Athletic.

“I was at the Euro 2016 final when Portugal played France, so I had an opportunity to watch Joao there,” Moyes explained, when asked how he became aware of the 25-year-old’s qualities. “He can play in a number of roles. There’s a little bit of Manuel Lanzini about his play. He could play off the left or right and even as a No10 if needed.

“I hope he will be a player who will create and score a few goals for us. Even before Manu’s injury we were looking to add some creativity but now the need for that type of player is even more acute.

“At the start of the window the move didn’t look like it would happen but as the days have gone on it became more likely.”

Moyes has plenty of experience of signing players from overseas during his managerial career with Everton, Manchester United and Sunderland.

The likes of Maroaune Fellaini, Steven Pienaar and Kevin Mirallas have all proved successes in the Premier League after being brought in by the Scot, and he will hope Joao Mario adapts quickly to life in English football equally well, but has asked for fans to be patient as he settles into life in a new country.

“The hardest thing about bringing players over from other countries is them having to adapt to the tempo of the game here.

“I would hope that Joao can adapt quickly because we need him to hit the ground running. We will need to ask for some patience in getting him settled but our situation means we will need to get him involved quite quickly.”