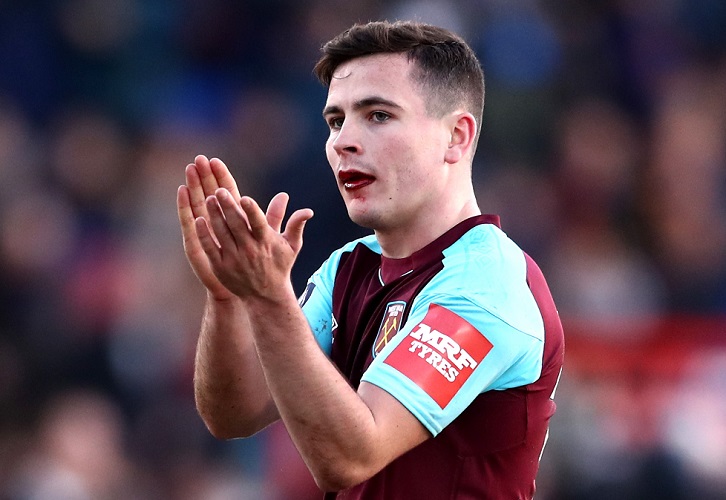 The midfielder had a front tooth knocked out after receiving a high boot to the face from Shrewsbury Town captain Abu Ogogo in Sunday's 0-0 Emirates FA Cup third round draw.

The 10,000-strong crowd and a live BBC television audience of millions collectively winced as Cullen’s incisor flew through the air before landing on the turf at Montgomery Waters Meadow.

West Ham’s first-team doctor Richard Weiler and physiotherapist Fraser Young went to the 21-year-old’s aid, with the former locating the rogue tooth and placing it in a cup of milk, and the latter stemming the bleeding inside Cullen’s mouth with a piece of gauze.

The brave player walked to the touchline, where his blood-stained shorts were replaced, but not before the Academy of Football graduate was told to re-enter the game in his underpants by coach Stuart Pearce – a man accustomed to playing through the pain barrier himself!

A fresh pair of shorts were located and Cullen was allowed to play out the remaining 15 minutes of the game before he was driven to hospital by a member of the Shrewsbury Town groundstaff. There, the tooth was replaced in the youngster’s mouth and held in place with a splint.

I haven’t got a gap, even though I saw Nobes tweeted ‘Mind the gap’ during the game!

“The Doc found the tooth and put it in a cup of milk as the calcium in there helps to keep the tooth alive and as healthy as possible,” Cullen explained. “A member of the Shrewsbury groundstaff took me to hospital straight after the final whistle, so I’d like to thank them, as well as the medical staff at the hospital for being top-class when I got there.

“They put the tooth back in and fitted me with a little brace to keep it in place, so I haven’t got a gap, even though I saw Nobes tweeted ‘Mind the gap’ during the game!

“When I went off and after I’d had treatment, I was waiting for the kit man to get me a new pair of No33 shorts from the dressing room and Stuart Pearce was encouraging me to go back on in my pants! He’s not the sort of guy you normally say ‘No’ too, but the fourth official put his arm across and wouldn’t let me.”

Amazingly, Cullen had the same tooth loosened in an aerial challenge during the Hammers’ Premier League Cup final victory over Hull City at the Boleyn Ground in April 2016, but now he is set to have it fixed once and for all.

On Monday, the Republic of Ireland U21 captain met a dental specialist and will undergo root canal treatment next week to repair the damage. In the meantime, and for a period after the surgery, Cullen will wear a gumshield to prevent further injury.

“Two of my teeth need root canal treatment, which we will fit in around the games we’ve got coming up, and once my mouth calms down a bit.

“It’s being held in place by a splint across the front at the moment and I can’t eat anything too hard, so I’m sticking to pasta, soft stuff and chopping my food up small to ensure I keep my energy levels up and I can get back to training at Rush Green.

“To be honest, my lip is a bit swollen and that’s the sorest part. The teeth are throbbing a bit, but I’m on painkillers so it’s not too bad, and I just want to get back to playing football. I’ll be fine!”