Celebrating another fantastic year of work in the community

West Ham United’s Foundation celebrated another fantastic year of work and successes in the community at London Stadium at their annual Awards Ceremony.

With over 35 programmes across Community, Learning and Football Development in east London and Essex, the Foundation had another bumper year in 2017 – and are widely seen as one of the leading community programmes in the Premier League.

Foundation chief executive Joseph Lyons hosted the event, joined by key stakeholders, trustees and Foundation staff. The attendees were given the opportunity to hear from guest speakers, able to celebrate key highlights from 2017 and give their input to the plans that will see the Foundation grow further in 2018 and beyond. 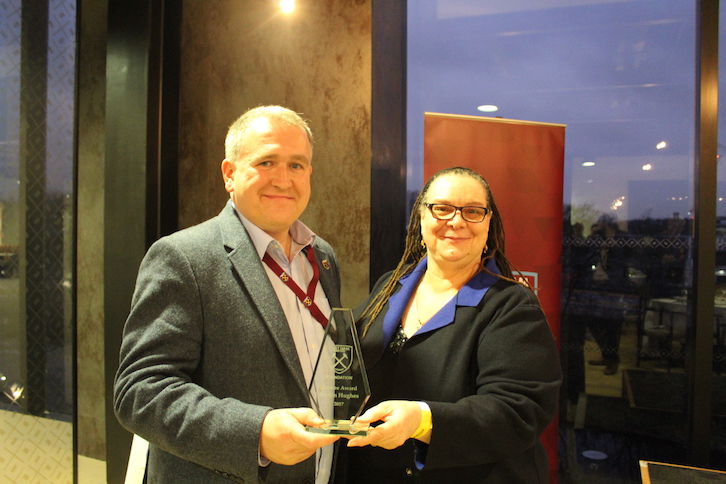 Austin Hughes won the Trustee Award, recognising a staff member who goes above and beyond in their role.

On winning the award, Hughes said: “I must admit I was pretty stunned with the award! All of us at the Foundation are proud to work in our community and spend every day inspiring people to change their lives.

“It’s an amazing place to work and all of the team are fantastic, so this award is as much for everyone in the team as it is for me.”

Throughout 2017, the Foundation continued to develop their programmes, offering ground-breaking and innovative new schemes to change lives within the local community. As the Club’s outreach vehicle, the Foundation’s vision is to be the leading social and community outreach organisation in east London and Essex, using the power of the West Ham United brand to provide inclusive, life-changing opportunities for individuals and the wider society.

From Community School Hubs, that has seen the Foundation partner with seven Secondary schools to deliver learning interventions to pupils, to the 150Club, the diabetes prevention programme which was celebrated at a House of Lords event back in October, the Foundation diversified its offering throughout 2017 and worked with over 20,000 people throughout the year.

As well as the community programmes, 2017 also saw the Foundation open their fantastic new 3G pitch at their Beckton facility. The new pitch is now hosting over 1200 participants every week, keeping the local community active and engaged.

Richard Scudamore, Premier League Executive Chairman, said of the Foundation earlier in 2017: “I always say that West Ham are at the leading edge of this space and always come up and deliver.”

Lyons endorsed Scudamore’s view that the West Ham United Foundation continued to lead the way over the past 12 months.

“2017 was another fantastic year of growth for the Foundation, and I was hugely proud to have seen our work and delivery grow and expand to new heights. Since 2013/14 through to the end of this year, we will have invested over £6m into our community – allowing us to serve in the best interests of residents and delivering a lasting legacy from the heart of east London.

“I am also extremely excited about our plans for 2018, with new programmes, initiatives and schemes of work that will continue to deliver life changing outcomes for residents young and old.”