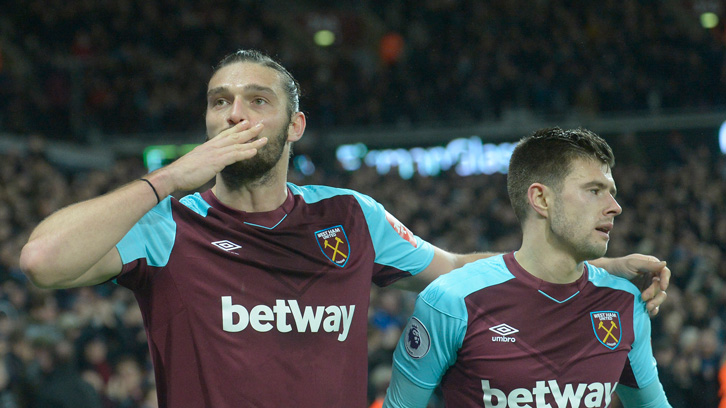 Both sides had opportunities to add to their respective goal tallies. Manuel Lanzini and Marko Arnautovic came close for the Irons while Salomon Rondson wasn’t far off a chipped effort.

But the scoreline remained 1-1 until the dying moments of the game when Carroll swept home his second from a narrow angle.

The first real chance of the game fell to the away side as Rondon got between the West Ham defenders and attempted a lob, which just sailed over Adrian’s crossbar.

An excellent opportunity fell to Lanzini midway through the first period when a contested aerial ball fell kindly for the Argentinian. The No10’s half-volleyed effort was well-struck, but straight at Ben Foster, who palmed away.

Carroll, back in the starting XI, saw a curling shot from the edge of the penalty area narrowly go over while McClean tested Adrian with a swerving strike.

The Baggies took the lead on half an hour as McClean got the better of Adrian, as his effort from around 20 yards took a massive deflection off of Angelo Ogbonna and found the net.

Lanzini came very close to levelling the match seven minutes before half-time when he brought down a Cheikhou Kouyate cross with a sensational touch, but his curling shot was expertly saved by Foster, as the Baggies entered half-time 1-0 up.

Captain Mark Noble was brought on at half-time as David Moyes look to introduce some urgency to his side’s performance, and there was almost a leveller a minute into the second period. Marko Arnautovic found Carroll in the box but the No9’s shot was over the woodwork.

On 59 minutes Carroll had his goa!. The striker rose perfectly between the West Brom centre-backs to head home a pinpoint Aaron Cresswell cross, giving the 28-year-old his first finish since April.

Less than ten minutes later Arnautovic came close to yet another goal, with the Austrian linking well with Lanzini and getting into a promising position. His subtle dink was kept out by Foster’s feet.

There were hearts in mouths at London Stadium as it looked like West Brom substitute Oliver Burke was going to race through into a one-on-one situation, but some excellent running by Ogbonna saw the Italian make a vital block, keeping the score level.

And, with the final moments ticking away and the chances of a victory seemingly gone, Lanzini made a final burst forward and played the ball to Arnautovic. The No7’s ball found Carroll, who calmly converted his second and the winning effort.