Antonio hungry for more goals after scoring at Liverpool 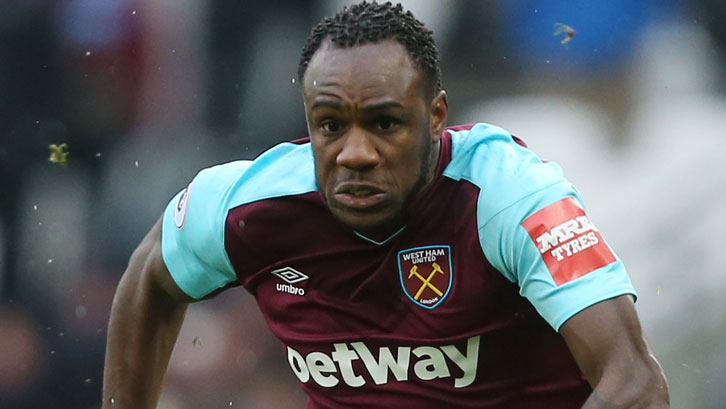 Michail Antonio is hungry for more goals after finding the net for just the second time this season at Liverpool.

The No30 has endured an injury-affected season, with rib and calf problems restricting him to just 14 Premier League starts so far.

However, after following his first assist of the campaign in the home win over Burnley with a well-taken strike at Anfield, Antonio believes he can go on a run of goalscoring form over the final ten games of 2017/18.

“Everyone loves scoring, it’s one of the best things in the world, so to get back on the scoresheet has given me confidence,” he said. “It was obviously a bad result for us, but hopefully now I can go on a goalscoring run.

“I’m going to try and play my part and do what I can for the team. I hope I can add more goals to my tally between now and the end of the season.”

To get back on the scoresheet has given me confidence. Hopefully now I can go on a goalscoring run

Last weekend’s 4-1 defeat at Liverpool made it back-to-back away losses for the Hammers, with a trip to resurgent Swansea City next up on the fixture list.

The Swans have won six straight home games in all competitions under new manager Carlos Carvalhal, but Antonio insists the east Londoners can stop the South Wales side in their tracks at the Liberty Stadium.

“To be honest, every time I go on the field, I feel like the team is going for three points,” said Antonio, who scored in West Ham’s 4-1 win at Swansea last season. “I do feel we have got better players than Swansea and Burnley [who we play at home on Saturday 10 March] and we should be able to beat them, but it’s the Premier League and every game is different and every game is hard. There are no easy games, but I feel we can do it and that it should be six points.

“At home, Swansea have beaten Liverpool and Arsenal recently, so they’re going very well at the Liberty Stadium, so it’s not going to be an easy task. We need to go there, be solid and rigid, start well and keep their fans quiet.

“Swansea have been doing well, but we’ve done our research and will go there aware of their strengths and weaknesses and with a gameplan from the gaffer to give us the best possible chance to win the game. We’ve got to go out there, execute his plans, and win the game.”

Two defeats in their last three matches have seen the gap between West Ham and Swansea in the third relegation place close to three points, but Antonio says the Hammers cannot afford to worry about league positions when they kick-off on Saturday.

“You can’t allow yourself to feel pressure. You’ve just got to go out there and play. You can’t worry about things happening in the background, because it can distract you from your work. As soon as you step over the white line, there is nothing going on outside those lines.

“The league table is not on the pitch!”