Snodgrass and Martinez among loan stars in action 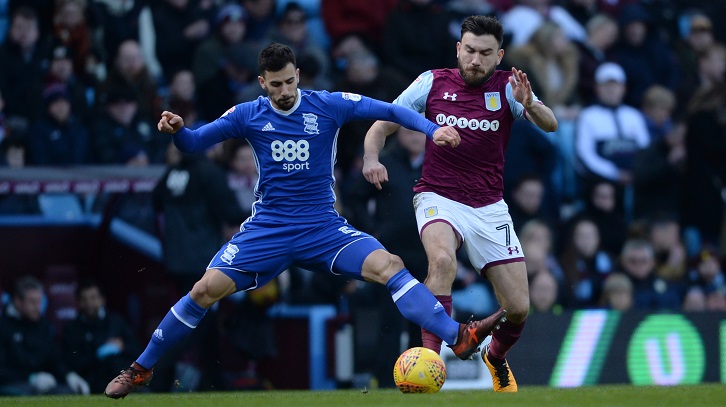 West Ham United’s loan stars Robert Snodgrass and Martin Samuelsen were both in Championship action at the weekend, while Toni Martinez made his debut in Spain.

Scotland international Snodgrass started on the right wing as Aston Villa made it seven league wins in a row by beating Birmingham City – who started former West Ham loanee Carl Jenkinson at right-back – in the Second City derby at Villa Park on Sunday.

The victory saw Villa climb back above Derby County into the second automatic place, albeit 12 points behind runaway leaders Wolverhampton Wanderers.

At the other end of the table, Norway international Samuelsen played the full 90 minutes as bottom side Burton Albion collected a creditable point from a goalless draw at Ipswich Town.

The home side started Academy of Football graduate Jordan Spence, while Freddie Sears was an unused substitute. Burton remain a point behind Sunderland and four points from safety.

Staying in the Championship, Reece Burke was an unused substitute as Bolton Wanderers scored a 1-1 draw with Fulham at the Macron Stadium to rise to 19th in the table, two points above the relegation zone. Bolton return to action at Cardiff City on Tuesday evening.

Elsewhere in the Football League, Moses Makasi was handed a watching brief from the bench as Plymouth Argyle came from a goal down to win 2-1 at EFL League One high-fliers Shrewsbury Town. The Pilgrims will seek to back that victory up when they host AFC Wimbledon at Home Park on Tuesday night.

Reece Oxford was also an unused replacement for German club Borussia Monchengladbach in their 1-0 Bundesliga defeat at Stuttgart.

Finally, Toni Martinez was handed his debut for Spanish club Real Valladolid, coming on for the final 18 minutes of their 1-0 Segunda Division defeat at Granada – a result which leaves them tenth in the table, three points outside the promotion play-off positions.

The striker could make his home debut for Valladolid at home to leaders Huesca on Friday evening.