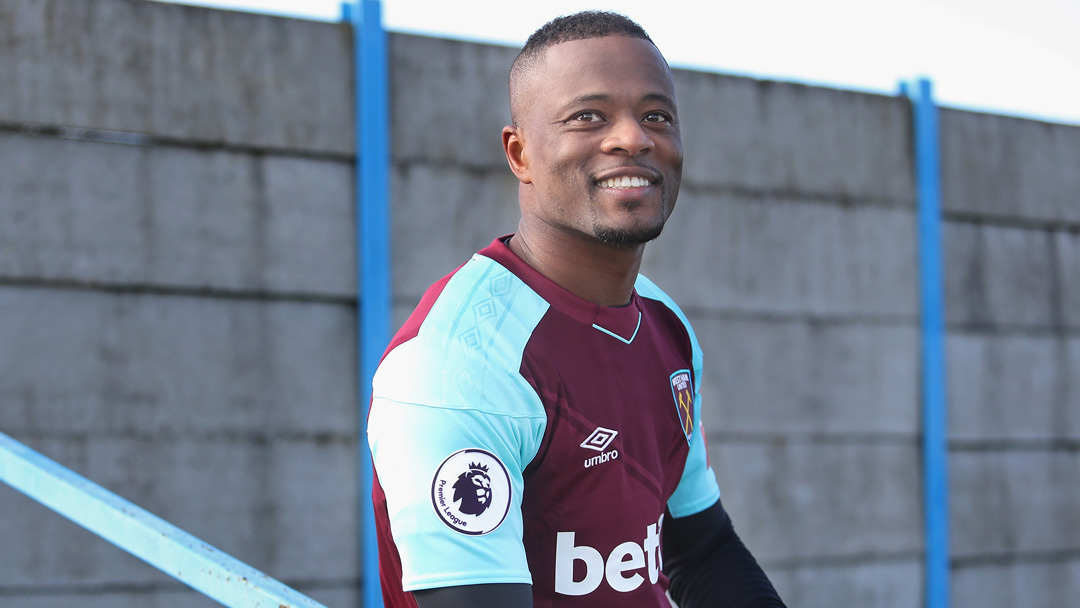 West Ham United are pleased to confirm the signing of the vastly-experienced Patrice Evra on a short-term contract.

Capped 81 times by France, the charismatic Evra has won seven league titles and the UEFA Champions League during an illustrious career with AS Monaco, Manchester United and Juventus.

Evra, who joins the Hammers on a contract until the end of June 2018 and will wear the No27 shirt, worked with Hammers manager David Moyes during his time at Old Trafford, and is looking forward to linking up with his old boss and returning to the Premier League.

“I’m really happy to be a Hammer, to be back in the Premier League and I love this game!” said the dynamic left-back, using the catchphrase he has made famous on his hugely popular Instagram channel.

“It’s amazing to be back and I am thankful to West Ham for giving me the opportunity to do my job. When I wake up and know I am going to work hard, to have fun with my teammates and give my best on the pitch, I want to say a massive thanks to West Ham, to the Chairman, to the manager to all my teammates, who have given me a nice welcome, my agent and my brother.

“I’m just happy to be here, it’s really simple. You don’t realise how lucky you are and just to wake up this morning and know I am going to train with my new teammates made me smile!”

I’m really happy to be a Hammer, to be back in the Premier League and I love this game!

Evra revealed that he could not wait to sign for West Ham, once he was made aware of the opportunity to be reunited with Moyes, and had talked the move through with both the Scot and Joint-Chairman David Sullivan.

“It happened really fast. My agent called me and told me I needed to come back [from Dubai] to London as quick as I could and I had a nice meeting with the manager, who I know from Manchester United, of course, and I met the Chairman, so it was really easy.

“When you have to make a deal and money is not the issue, the deal could be done in five minutes. The main thing was for me to join West Ham and to help my teammates to win as many games as we can.

“It was the fastest thing I have done in my life, because both parties wanted to work together, so it was very easy to make an agreement!”

Born in Dakar, Senegal, in May 1981, Evra moved to France with his family as a baby. After playing youth football there, he began his senior career in Italy, playing for Marsala and Monza before returning to France.

There, he initially played as an attacker for Nice, before switching to left-back midway through the 2001/02 season – a move which would shape his career – and he would end the campaign in the Ligue 2 Team of the Year.

Evra’s impressive form saw him move along the coast to Monaco, where he won the French League Cup in 2003 and featured in his first Champions League final and made his senior France debut the following year.

After three-and-a-half seasons with Monaco, Sir Alex Ferguson took him to Manchester United. There, he won five Premier League titles and reached two more Champions League finals, winning the competition for the first time against Chelsea in 2008.

Evra also became a regular for France during his time at Old Trafford, where he played alongside Chicharito for four seasons, appearing at UEFA Euro 2008 and 2012 and captaining his country at the 2010 FIFA World Cup finals.

After spending his final season working under Moyes, the defender moved to Italian champions Juventus in 2014, where he linked up with his new West Ham teammate Angelo Ogbonna and won two Serie A and Italian Cup doubles.

After moving back to France with Marseille in January 2016, the 36-year-old travelled to a fifth major tournament with France, helping his country reach the European Championship final on home turf, only to be edged out by Jose Fonte and Joao Mario’s Portugal.

West Ham United would like to welcome Patrice to London Stadium and wish him all the best for his time in east London.