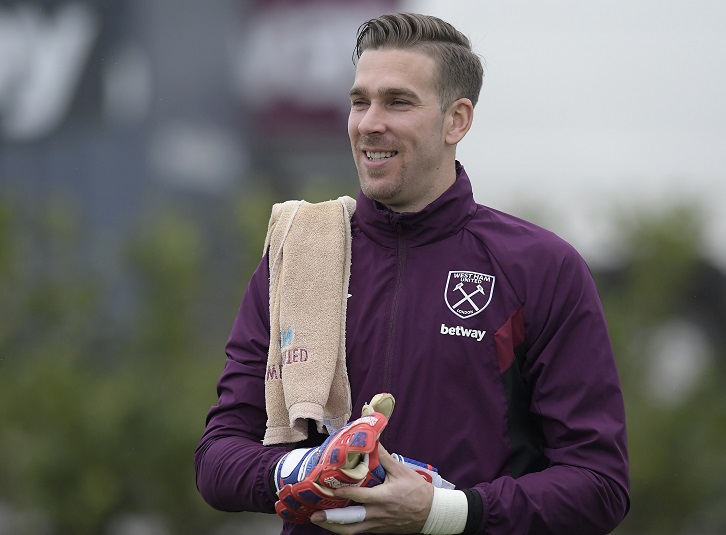 Adrian is excited by the prospect of playing in a West Ham United side led by the potent attacking duo of Joao Mario and Chicharito at Brighton & Hove Albion.

The goalkeeper was hugely impressed by the Portugal midfielder’s Premier League debut at home to Crystal Palace on Tuesday evening, including the way he combined with the Mexico striker.

One such link-up led to the penalty which Mark Noble converted to earn the Hammers a deserved 1-1 draw, and the Spanish stopper is looking forward to seeing what the international attacking pair can do at the Amex on Saturday afternoon.

“It was a magnificent performance from Joao, considering he has just come to the Premier League and this was the first time he had played at this different tempo and intensity,” said Adrian.

“He played a great 90 minutes, was always sharp, was always trying to go forward and was sharp with his passing and dribbling. I think he played really well and he has to keep going in this way.

Joao Mario played a great 90 minutes, was always sharp, was always trying to go forward and was sharp with his passing and dribbling

Adrian, Joao Mario and Chicharito could be joined in David Moyes’ squad by a host of players returning from injury at Brighton, with the likes of Winston Reid, Jose Fonte and Michail Antonio available again and new signing Jordan Hugill expected to be involved for the first time.

With Moyes’ options bolstered, the No13 is hoping the Hammers can extend their run to one defeat in eleven Premier League matches.

“On Tuesday, both teams fought until the end to get the three points but the result was a fair one. Both teams had chances and at the end of the day it is one more point, we are still on a good run, so I think it’s a good result.

“It’s a handicap to have so many players injured, which makes it hard for the manager and hard for the team, but I think we did well. The players who are fit are playing well and giving 100 per cent, so we have to keep working in this way and hope the injured players come back as soon as possible.”